Tips on Writing a Screenplay & a big REVEAL!

If you don't know Heather Holden, you should. She's a fantastic artist with a unique style. And she writes hilarious vampire/horror comics. I've been dying (haha) to have her draw something for me, and finally decided to commission Gabe - he needed a new look. And here he is! 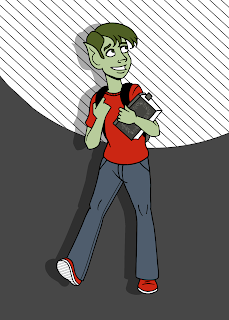 Now in this snapshot of Gabe, can you see he's short? He's also smart with his book (haha) and a little unsure of himself, but a pretty happy guy in high school. And he's a green goblin. That's a lot to get from a picture, but it's all there, captured by the artist!

And as my last guest post of the Taking Back Beast World campaign, I'm excited to be at Heather's place talking about Gabe's journey in visuals!


THIS JUST IN!
I re-published BROKEN BRANCH FALLS, Beast World Book One
for KINDLE! Yippee!


Now, on to the topic at hand:

I love having so many terrific writers as friends--I get exposed to so many great stories! And I'd love to see them up on the big screen or as a series on the small screen. I've even offered to collaborate on writing screenplays with some of them. Unfortunately, it's just one more thing on my never ending want to do list... But it's definitely not at the bottom.

If you've ever pictured your book as a movie, you should try turning it into a screenplay! This is especially good for short stories, and you'll see why in a moment. You can also dive straight from an idea into a screenplay. Here, I've gathered some pros & cons & tips for writing a Screenplay:

Screenplay writing can be invigorating and exciting. It can also be somewhat traumatizing. Either way, it's something to consider, especially with so many competitive venues for visual entertainment.

One last thing... Funny how things work out!
I planned my Taking Back Beast World campaign post topics over a month ago--that way I don't have to scrounge up ideas to write about. As you know, this last week was Screenplays. Then, by happy coincidence, I just received some exciting news: I made it to the Quarter Finals of a Script-writing contest!

A few months ago, I transformed JOLISSA - AN ANTI-PRINCESS STORY into a screenplay and submitted it to an animated script contest. I was so excited to find out I made the first cut! I don't know how much farther I'll go, but I've been floating with that awesome recognition. Wish me luck!


Ever consider writing a screenplay? Go for it!
Are there any books you'd like to see on the big or small screen?

Congratulations, Tara!
I would like to see my books as movies and I'd have no problem trimming them down. Good thing they are all short to begin with.

Congrats, Tara! I'd love to write a book and have it turned into a movie. It would be good to learn about screenwriting so I could have some input into the movie. But first I must finish the book.

Heathe did a great job. I love her artwork.

Hi Tara - what a wonderful job Heather did with Gabe for you ... he does look 'fun'. While your screnplay ideas seem wonderful ... I'll need to be back to take stock - good luck with all your projects - cheers Hilary

I would love to see a book of mine on any screen, but it's not really something I can wrap my brain around.

Love the picture of Gabe. She did a great job!

Whoa ho Wow! Congrats on making the finals in the screenplay contest. Great post and tips. Your campaign was awesome inspiring. Cheering you on.

Research what to do with that screenplay when it's polished and ready, too.

I never thought about writing a screenplay, but these are really good tips.

Congrats on making the Quarter Finals!

Thanks for the kind words! Happy I could do Gabe justice for you.

And great screenwriting tips! I used to dabble in it, but that's already been many years ago, heh. Also, so exciting about the script-writing contest! Congrats on making it into the quarter finals!

These sound really good. There are so many similarities between novels and screenplays. Not structure but lots of other pieces.

I'm always asked to ADD to word count, as my first drafting is terse and needs more... Either way, good to know what remedies most likely need implementing (such as my overuse of passive construction, like here ;) )

Congratulations, Tara!! You rock! And thank you for sharing your tips.

That is truly awesome! Congratulations!
Turning a 300-page book into a 100-page screenplay is a true challenge! Good for you! Gabe is adorable!