A visit from a Muse

Kimberly blogs over at Meetings with my Muse, and on Saturdays she hosts other authors in a segment called, what else, SATURDAY AUTHOR SPOTLIGHT! Check it out or sign up for a spot yourself. I am excited to be there on Feb 1. Yay!

Kimberly is also a fellow MG/YA sci fi/fantasy author, and her book THE HEADHUNTER'S RACE is available now. Here are the details. (I love that cover!) 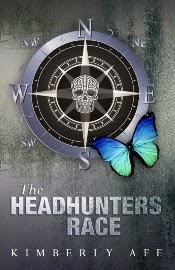 Summary
Sixteen-year-old Avene was sentenced to prison at thirteen for a crime she didn't commit. Now she has a chance to win her freedom back – if she enters the Headhunters Race. Second prize isn't so bad either, an upgrade to the Leisure Prison if you make it to the finish line. To win either prize, Avene and the other prisoners must navigate one hundred and fifty miles of dense forest, desert, and worst of all, cannibal territory.

With a mechanical collar timed to strangle the prisoners if they're not back in nine days, Avene allies herself with seventeen-year-old McCoy, another prisoner that insists on helping her at every turn and a boy she's trying hard not to fall for. Together they battle nature, other prisoners, and the timed death collars to win the coveted prize. But when Avene is tested with one deadly conflict after another, she realizes there is more at stake than winning her freedom – first she has to survive. 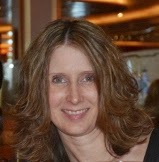 Author Bio
Kimberly is the mother of two awesome kids, wife of the nicest man in the world, and her dog's best friend. She works by day and writes middle grade and young adult science fiction and fantasy novels in her spare time. She lives with her family in the beautiful Sonoran Desert.

Where to find Kimberly:

And an added bonus, Kimberly has a great story behind her...

The Headhunters Race has a bit of a long journey.  The idea was born on June 26, 2011 after a Zelda game commercial inspired me.  The commercial was brilliant and I thought why can't they make a movie that cool?  And then I thought, why don't I write a cool adventure myself!

So I brainstormed this story with my son over a dinner of spicy spaghetti a couple of nights after the idea came to me.  We worked out the entire novel:  the characters and their motivations, the world, and the details of the race as I frantically wrote it all down.  My husband and daughter also helped me brainstorm items that I needed worked out.  I then spent a little while playing around with Avene's voice and then wrote like crazy.  I finished in December of 2011.  I actually started having critique partners read it in November of 2011 and began querying agents in January of 2012 after more revising.  I also entered it into a few popular contests around the blogosphere in early 2012.  Then I took a very long break due to life circumstances with hubby’s heart and moving.  Early this year I got back into writing.  I’d been thinking about self publishing for quite awhile so when querying a few more agents and a handful of publishers didn’t work out, I decided to go for it, and now, 2 1/2 years later, the book is out there!  Wahoo!

I applaud Kimberly for taking the leap into self-publishing.
Thanks for stopping by and supporting her!


What sparked the idea for your WIP?
Make sure you visit her if you're interested in being spotlighted.
And have a fantastic weekend!
at 6:30 AM

The book sounds great, and I love the story behind it. :)

Thank you so much, Tara, for hosting me! And thanks to optimisitic Existentialist, Alex, and Madeline! :)

Congrats to Kimberly! I loved reading about the story behind the book. ☺

Congratulations, Kimberly! I'm glad you realised that traditional publishing isn't the right path for everyone.

Congrats Kim on taking the leap. Glad your hubby has improved and hope moving has only enriched the life you have.

A timed mechanical collar sent chills down my spine! Great idea for a fantasy.

Thank you Dana, Carrie-Anne, Sheena-Kay, and CLee! My daughter is the one that came up with the collar idea. :)

Congratulations to Kimberly! Thank you for sharing your journey with us. I don't remember what sparked my idea for my latest WIP. A dream or one of those what-if questions.

Headhunters Race sounds exciting! Need to put this one on my TBR list.

Thanks Christine, Elizabeth, Rhonda, and Cathrina! :)

Kimberly rocks! I love the cover and premise of her book. Thanks for the feature and the info - and wishing Kimberly much success! :)

Congrats & Best of luck! My 18 Things book idea was sparked by my cousin's son being diagnosed with leukemia & I thought, "Why don't I have a life list?" So I wrote one, with getting a book pub'd at the top, then I decided to write a book about life lists :-)

Thank you so much, Lexa, Nicole, and Jamie!

Wow, this is new to me, but I really like the sound of it! The cover is pretty cool too. Thanks so much for sharing. :)