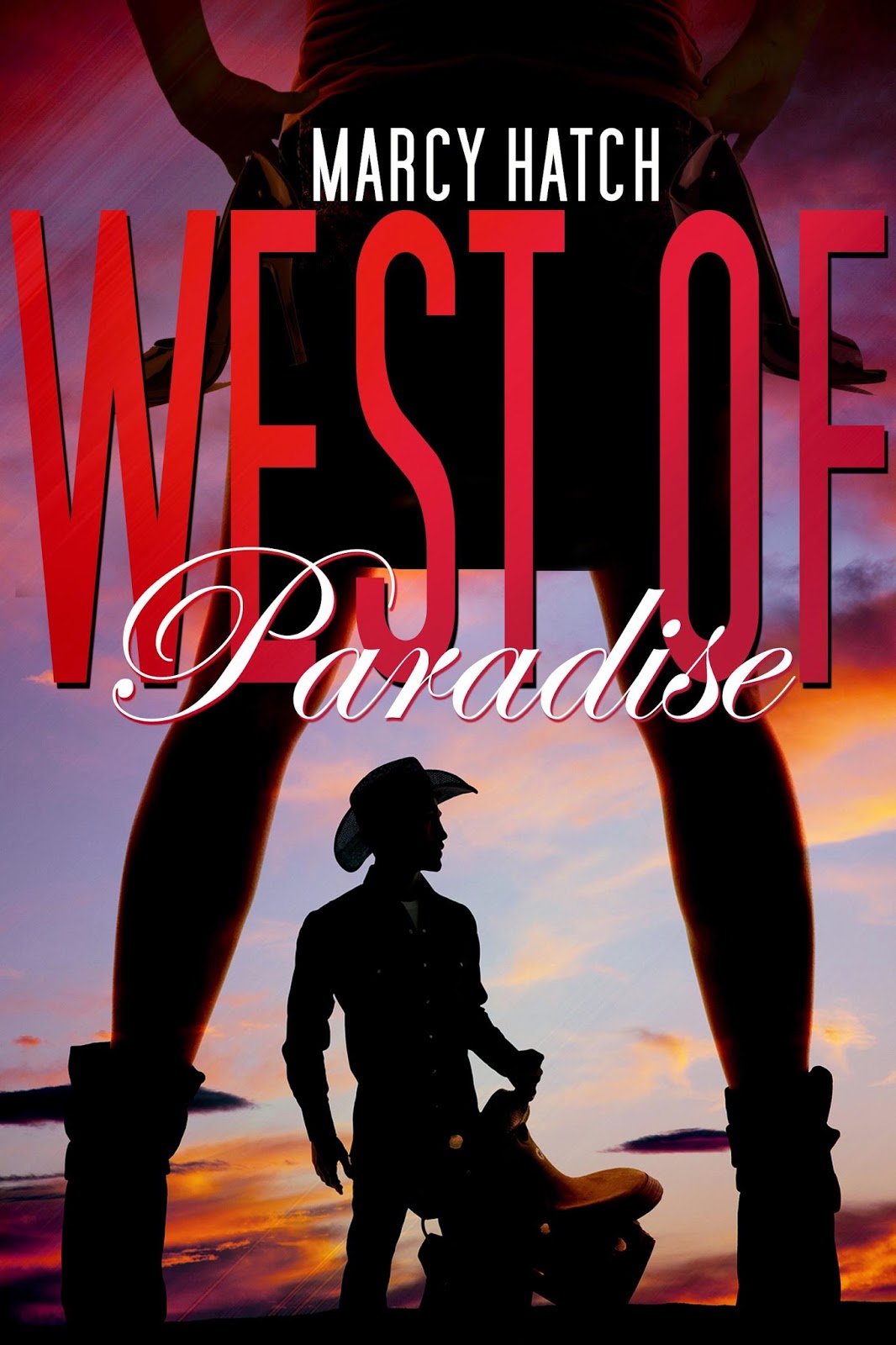 WEST OF PARADISE - available at amazon
Set in the Old West, this high-spirited tale of mistaken identity, romance, and murder is part historical fiction, part time travel fantasy, and completely captivating.
Speaking of Curiosity Quills, I'd like to tell you about a fellow CQ author's new book coming out... I give you an Interview with Michael Panush.

Welcome, Michael. How did you find yourself at Curiosity Quills?
It actually came a huge surprise. I just received a facebook message from them out of the blue. I had posted a whole bunch of stories online and they found those and were eager to professionally publish some. I couldn't believe it. I'd submitted my work to publishers before, and thought that was how it was done. I never heard of a publishing company seeking out a writer! At the time, the Stein and Candle Detective Agency was my biggest series, so they started publishing anthologies of that. We've had a great relationship ever since. CQ has been getting better and better, with great editors and artists who really improve my books.

Your first book had some fun Hollywood dinosaurs - how do you come up with these ideas?
It's all taking elements from history and skewing them – only slightly. For instance, the dinosaur actors in Golden Age Hollywood were inspired by the Dogville Shorts, where hapless canine actors were put in clothes and hauled around, pulled by fishing line on the silver screen. I play the same kind of game in Dead Man's Drive. Henry Ford – crazy, fascist, and anti-semite – only needs a little tweaking to turn him into an occultist, who became the basis for the villainous tycoon Reed Strickland. The sequel to Dead Man's Drive, Detour to Apocalypse, features a character based on Jack Parsons – a real life rocket scientist and kooky occultist. There's much crazy stuff in history that I only need to skew things a little to suit my stories.

Your books have so many cool things going on - how do you classify them as a genre? (I have the same problem!)
That's harder for some of my stories more than others. The Rot Rods series has paranormal elements, hardboiled crime and Noir, straight-up action, horror, and probably a dozen other things. I usually say that the Rot Rods series is an urban fantasy set in the 1950s about a hot rod-riding zombie. If that description doesn't interest a potential reader, then they're probably a lot cause.

I love the names of your characters- Wooster Stokes, Zoot Suiter, Angel Rey, and Betty Bright -very hip to the 50s! How do you pick them?
Thanks! I'm really glad that you like the names, as choosing the right name for a character matters a great to me. I try to pick names that flow naturally from the character's background. Wooster Stokes is an Okie – a redneck who settled in California during the Great Depression. He needs an appropriately old-fashioned, cowboy sort of name. Angel's a Mexican and a former Pachuco street tough, but he's got a good heart. Betty Bright grew in the suburbs, so she needs a very '1950s' girl's name and her last name shows that she's naive and hopeful. Zoot Suiter isn't actually a name – it's refers to young men, usually Mexican, who wore colorful zoot suits and were part of the Zoot Suit Riots during WWII. It is a great subculture description, though!

Could you share a quote from DEAD MAN'S DRIVE? 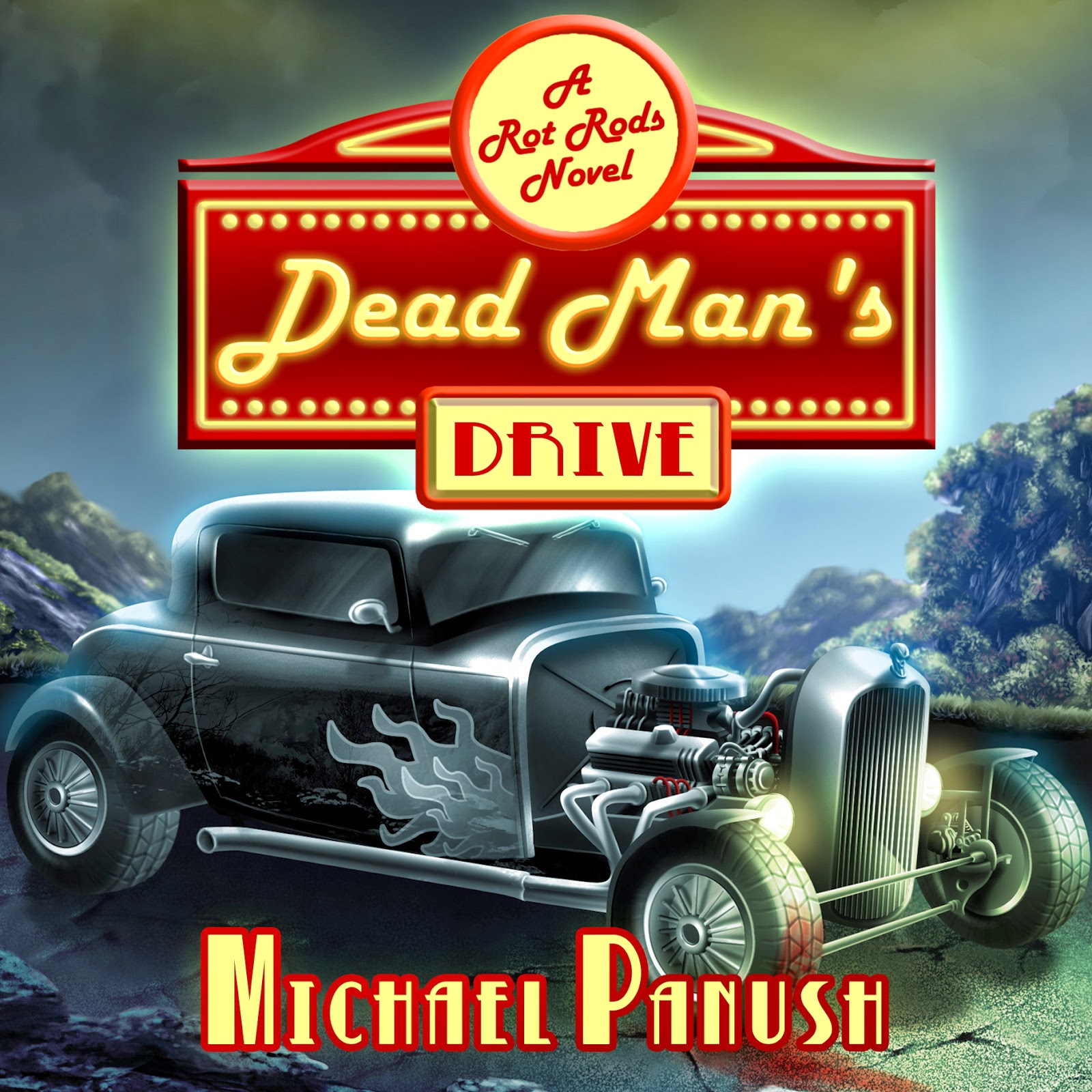 Sure! This excerpt is where Roscoe (the main character and a zombie) and Angel are trying to spy on some bikers in a crowded roadhouse. Roscoe has an idea of how to hear what they're saying:
“Goddamn it,” Roscoe muttered. “That jukebox is stopping me from listening in.” He touched his ear and then smiled to himself. He had an idea. “Say Angel,” he said. “I know you never go anywhere without a pair of switchblades. Give me a shiv, will you?”
Angel pulled out the switchblade and snapped it open. “What exactly you need it for, man?”
Roscoe gripped his ear and raised the blade. He slashed it down and started cutting. Putting the blade through the tough flesh caused sharp pain to race through his body and reach what was left of his brain. He winced, but kept pushing the knife down. Angel watched in mute horror until Roscoe finished and his severed ear fell limply to the table. Roscoe grinned and handed back the knife to Angel.
“I was right,” Angel said. “You have gone nuts.”
“I can sew it back on―don't worry.” Roscoe gripped the ear and then knelt down. It was strange to have the ear off and to hear his voice from two angles at once. It sounded like there was another Roscoe, speaking somewhere above him. “And it's not like it hurts my good looks any.”
“I thought hearing comes from those holes on the side of your head–not the ear itself.”
“It's called magic.” Roscoe wiggled the severed ear in Angel's direction. “It doesn't have to make sense.”
Then he tossed the ear across the bar. It was a light, underhanded throw. The ear landed under the table where Torrance and Mr. Roach were talking. Nobody noticed. Roscoe sat back up, covered the ear remaining on his head and did his best to listen.

What are you working on next?
My next project from CQ is El Mosaico, Volume 3: Hellfire. Like all El Mosaico stories, it's a standalone adventure about Clayton Cane – an Old West gunslinger and bounty hunter who was built from pieces of dead bodies, sewn together and animated with black magic. In this novel, Cane becomes the sheriff of a strange Texas town as he tries to leave his violent bounty hunting ways behind. It's a great read and I urge everyone to check it out!

Thanks for sharing with us, Michael. He's got such a great imagination!

Wow, there's a lot to celebrate this week. Congratulations to all. Nice Interview with Michael Panush. And Tara enjoy spring break, time with your family and your book signing. Good Luck, hope it's great.

Thanks for introducing is to Michael and enjoy your spring break Tara! Congrats on your boy making the basketball team :)

Congrats Michael on your unusual way to publication. That is wonderful!!!

My goodness! That is a post packed with goodness. The Western time travel looks good, as does the Noir. Congrats to your son (woot woot) and I will be seeing you in Atlanta!!!!!!! So happy!!!

An email from Piers Anthony is so cool—as is all the rest.

Congrats to Marcy! And best of luck to you, Michael.

Congratulations, Marcy! That snuck up on me.
And very cool Anthony returned your email.

Congrats to your son and Marcy and Michael. Wow, an email from Piers Anthony. Very cool.

Congrats to your freshman and way to go on getting to know Mr. Anthony better :)

Great interview and interesting road indeed. Congrats to your son too.

Atlanta sounds like a lot of good things will be happening there. Send pictures.

Wow, a super good week. Enjoy all those baseball games with your son!

Wonderful celebrations this week, congrats to your boy, Marcy and Michael. I was so late on my hop, I just added it in at the end of today's post :(

Then your break to see your parents and do some book signings .. sounds like a good combination to me ..

Cheers and enjoy your week - Hilary

Years ago I read a series by Piers Anthony. I think I got into it cause of my brother. I loved the whole set of stories, and I've tried looking for it again, but unfortunately I don't remember their names, just what they were sorta about. And he's got so many darn books to sift through on Amazon I give up looking for them. :)

Sarah Allen
(From Sarah, With Joy)

Lots to celebrate! Congrats to Marcy and Michael, and to you too, Tara! :) Have a wonderful week.

Excellent blog you have,

I am Yvonne one of Arlee Birds Ambassadors for the A to z challenge. I wish you well with the challenge and look forward to visit you in April.
Yvonne.
Ps have you thought of putting an A to Z Challenge logo on your blog?

New to your blog from A to Z and i picked a good day- lots of good things happening! Congrats!

Yay for Marcy! Tara, congrats to your Freshman! And you're only going to be about 5 hours away from me. Wish I could find the time to make the drive.

That's a provocative cover, Marcy. I mean that in a good way. Hope you sell lots.

Spring Break is definitely worth celebrating...except it goes by so fast!