So much going on, as usual.

Had an awesome time with Julie Flanders at the Bookfest at Icefest this weekend! Met some cool new authors and even sold a few books. Two funny stories. One - everyone thought I was so professional because of my banner, ha! And second, I had some plastic toy horns to give away to kids, and one little guy ran over and grabbed one, but Dad said no and put it back. This guy was determined, he kept grabbing it and hugging it. Later Julie kept cracking up about it - "You'll have to pry it from my cold, dead hand!" she said. So funny it was! 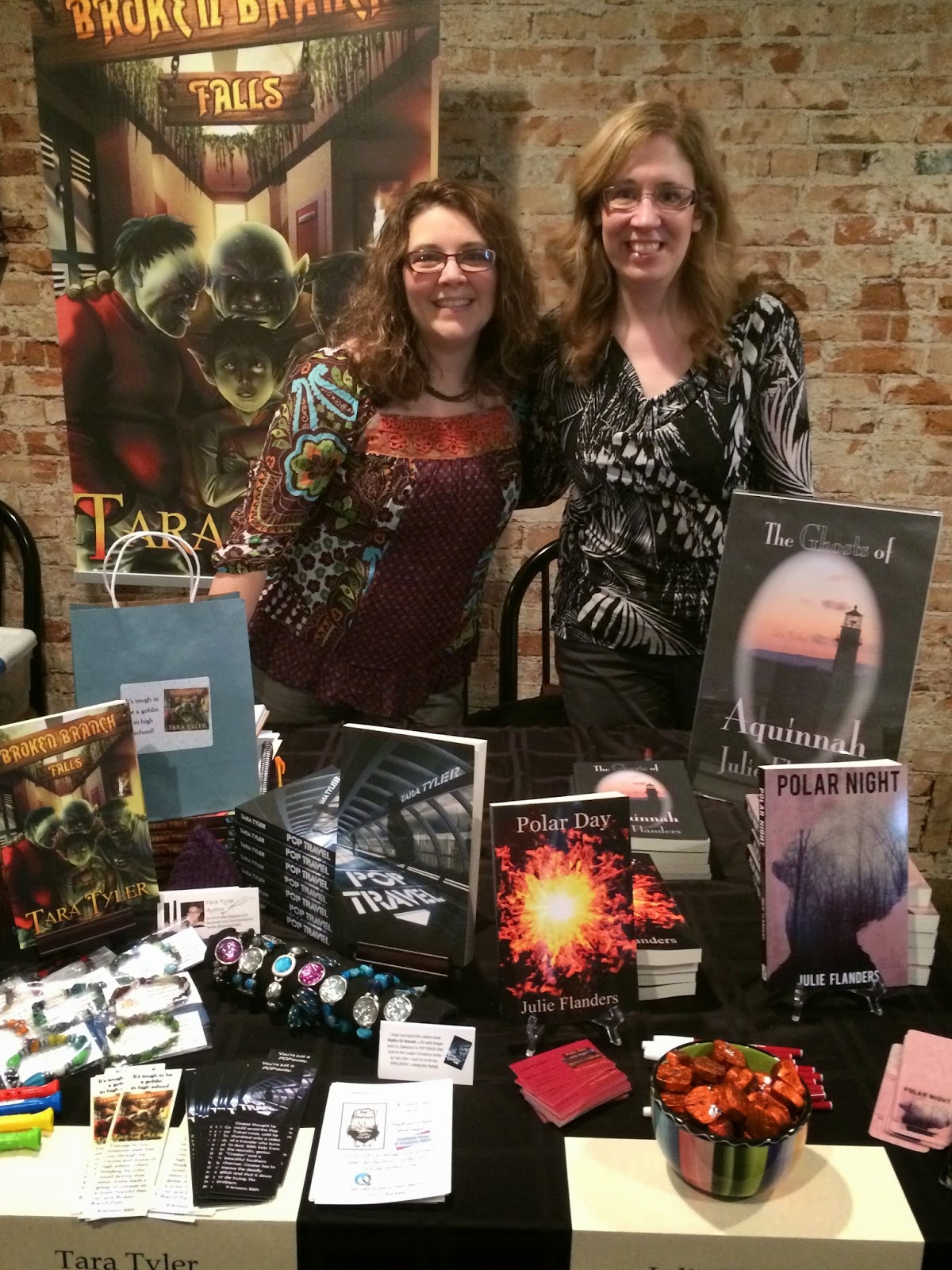 I'd love to hear about any conferences near you and meet you there if I can. Let's do this!

To add to my pretty fantastic weekend, my sons had great basketball games for me to watch - edge of my seat exciting!

And lastly, I'm happy to present the versatile C. Lee McKenzie. She's releasing another intense YA (already!) and brings us some insight on her writing process. So glad she stopped by!

Why I write what I do
I write contemporary, realistic YA because when I was a teen I could never finds characters in books that I could relate to. While young characters often floundered around, trying to sort out who they were and where they were going, they weren’t the main characters; they were not the ones driving the story. If they were, the stories were outdated. Little Women comes to mind. Those kids didn’t deal with the same issues I was dealing with and they didn’t talk like I did.

As for writing middle grade, I love to write fantasy adventure stories for that age. And these give me a break from my young adult topics of suicide, loss and abuse. I treat my middle grade stories as my sorbet.

How my writing process works
I get ideas from music, or a news articles or conversations. I often tuck these at the back of my head until I hear a character. They pretty much come full born, kind of like Venus from the froth. I see them, their voices are clear, and they can be downright bossy unless I start writing their story.

The most I do as far as planning is concerned is to write a sentence summary—never more than two sentences. That summary I put in the header, so it appears on each page. I tweak it as I go, or I tweak the story so it stays true to that summary. Then I write as long as the words come. When they stop, I take a break or print out and go outside to read what I’ve put down on the page. I don’t always do that right away. I often leave the day’s work alone until the next day.

One thing I’ve found helpful for starting again is to write a sentence or two that describes where I think the story should go next. Sometimes I even list things I want in the next scene or chapter. When I come back to the story, I have a place to start.

Short vs. Long
My shortest stuff is poetry, but I’m rather lousy at writing it, so I keep it private, unless it’s limericks or some doggerel for fun.

I love/hate writing short stories. They’re interesting challenges, and when I start one I’m always convinced I won’t be able to finish it.

I was kind of surprised when I checked out my list of books at Amazon [ http://www.amazon.com/-/e/B0042M1KYW]  see just how many I’d actually completed for anthologies. And I just had another one accepted by Leap Books for their new collection, Down the Rabbit Hole. It will celebrate Alice In Wonderland’s 150th Birthday.

Writing for teens, I stay at around 60,000 words for a novel. That seems to be about right for my stories and for the teen market. Haven’t heard otherwise.

one Secret
Cleo has struggled to heal after her baby sister’s death, but the flashbacks to the accident won’t go away. With the move, she vows to keep her tragedy a secret and avoid pitying looks.

one Mystery
Something’s strange about the abandoned house across the street—flashes of light late at night and small flickers of movement that only someone looking for them would see.
Everyone says the house is deserted, but Cleo is sure it isn’t, and she’s sure whoever is inside is watching her.

another Secret
In one night, Belleza’s life changes forever. So famous, her only choice is to hide her secret from the world so she can silence small town bigotry.

YOU CAN FIND C. LEE ON TWITTER AND FACEBOOK OR VISIT HER WEBSITE. SHE BLOGS AT THE WRITE GAME. See all of her book titles HERE.

Look at you and Julie! And it made for a cool new banner for you.
Lee, I struggle with short as well.

I love your display.

YA wasn't much of a genre when I was a teen. The one YA book I found and read was kinda flat. Realistic YA is hard to find, Lee.

I also have long had problems with short stories, since my natural inclination is to develop an idea into a long book and then a series or family saga. When I do write in the shorter form, I pretty much have to use my established characters, so I already know my characters and don't have to think up all new people and storylines.

I'm sure you and Julie had loads of fun!
The set-up looks very professional and *ahem* business-like. Go ladies!!

I saw you and Julie together on Facebook! It looks like an awesome time. Grats to you guys!

That is a snazzy poster! I'm glad you had great time.

Glad you guys had a good time! That's very cool.
I have a hard time with short stories, too. They're either awful or just have way too much going on and I have to turn them into novels.

That pretty banner is Shiny! Also, it does have a very professional feel about it. It's all kinds of awesome (read: I want one!). It looks like you had a great time!

Okay, slow computer, thank you for allowing me to actually get to Tara's site....

Julie, your lovely self, at the Bookfest posing. That's made my day.

And to add even more fun to my day, ta dah, there be the awesome celebrity author, C. Lee, featured. C. Lee, "YA" is the bestest!

Thanks for sharing the great news about the adorable C. Lee. Consider this posting shared! :)

What I really love to do is overwrite, and then pare down to a specific word count. That exercise has taught me so much about this craft.

Great to see some old friends here and to meet some new ones! Gary, you may be slow, but you're worth the wait!

Sounds like you and Julie had a lot of fun! Glad the conference was a success. :)

Writing short is more my strength. It's the longer works that are the problem. :)

Good to see two of my favorite bloggers together :)

So glad you had a chance to meet up with Julie! Sounds like a good time was had by all :-)

Being in Texas, there are several conferences but I've not yet decided if I want to go to one. I've gotten a little focused on seeing what writing I can knock out this year. We'll see what happens lol!

And Three Cheers to C. Lee and her latest release. Very interesting writing process. I can see how keeping the two sentence summary in the MS header can be the perfect way of keeping the story headed in the right direction at all times.

It sounds like you and Julie had a lot of fun! I've never been to a conference but would love to.

It's so exciting to see you and Julie together. It sounds like you had a great weekend!

Glad you and Julie had a great time. I'd love to link up at a conference sometime.

C. Lee's book sounds like a good one for my YA reader.

Awesome picture! I'm happy to hear it went well. Like Lee, I have a love/hate thing with writing short stories. I want to write more and they help me with the craft, but I'd rather write longer stuff.

How great to meet a fellow author!!! I wish I was there!

So many books. So many blogs. So many events! It's amazing how much time it takes to do everything and still fit in sleep and food!

I love seeing you two together. What fun to actually meet writers.

Thanks for letting me post here, Tara. I really appreciated the chance to "chat" with your readers.

I’ve nominated you for the Very Inspiring Blogger Award. Check it out at Write What Inspires You Blog

Hi!
Awesome post.
I love learning about writing styles cause they're so different from my own!

Fun pic of you and Julie! Glad you two had such a great time! :)

And I agree with C. Lee about short stories being challenging. I always had a difficult time with those, back when I used to try writing 'em!

The ones nearby me seem to be extremely expensive or they have applications close for tables about six months before the event . . . and I keep looking into it too late.

C.Lee - I love the characters whose stories you choose to tell - they are definitely realistic. :)