#Tips for Surviving the #Holidays

Don't you just love this whole concept? I do!


And I'm happy to have Rena over during her blog tour for a guest post. The poor thing is sick, but she's such a trooper, she wrote me a post anyway. Here's Rena!

Thanks for hosting me on my debut book’s blog tour, Tara!

How to Survive the Holidays: A Practical Guide

As you may or may not know, my debut novel, Acne, Asthma,And Other Signs You Might Be Half Dragon released the Monday before Thanksgiving. I haven’t recovered yet, which got me to thinking about how people always go about the holidays sort of grumpy and crazy, so here’s a post on how to survive the hype without pulling your hair out (You’ll want that hair for the pictures they take at the office party).

Tip one: Be flexible. Look around at everything that everyone is trying to do for the holidays and pick ONE thing. Pick the one thing that really makes you happy, and let all the other things be flexible. Now if you’re part of a family, everyone is going to have a different thing, but even so, that might take your crazy schedule down a couple notches as everyone prioritizes their hopes for the Holidays.

Tip two: Don’t hold yourself to the same standard as your neighbor/sister/friend/Martha Stewart who has been planning for the holidays since June. Those people have a lot invested in this time of year, and if you’re the type to survive the holiday, don’t feel bad that your stuff isn’t as awesome. If you’re looking around this year and feeling left out because those people have organized their family into the perfect carol choir, maybe you should consider building up a bit for next year. Which leads me to…

Tip three: Take notes. If you see someone doing something for the holidays that looks awesome and fun, but you can’t manage to do it this year, try planning for it next year.

Tip four: Smile. If you’re in a crabby line at the store, try to remember that the people who are crabby are having a bad day for a ton of different reasons. Maybe someone lost a job. Maybe their dog died, but they still have to put on Christmas. Maybe their heart is made of coal. Hey, it’s legit, that could totally happen.

Okay, there's more, but you don't have time for that! It's the holidays! Good Luck!

These are my kinda tips, Rena! Thanks for stopping by!
And here's the info on Rena's fabulous debut...


ACNE, ASTHMA, and OTHER SIGNS YOU MIGHT BE HALF DRAGON
Find it: Amazon  |  Goodreads 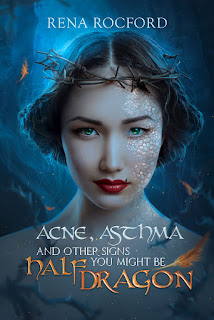 Allyson fights acne, not trolls. As an inhaler-carrying member of the asthma society, she just wants to meet the father who turned her mother into a paranoid, move-across-the-nation freak. Now she’s trying to fit in at yet another school, but for the first time in her life, she has a best friend, Beth. When Allyson accidentally spits fire at kidnappers in the mall, she realizes why her father isn’t in the picture: she’s half dragon. Her acne? Emerging scales. Her asthma? The side effects of her dragon’s fire breath. Instead of freaking out, unflappable Beth reveals her own troll heritage and explains how things work with the supernatural creatures hiding within the modern world of smartphones and skyscrapers.

When trolls kidnap a unicorn, Beth gets blamed. Allyson is determined to prove Beth’s innocence and keep her friend off the unicorn chopping block. When they start looking for the kidnappers, they get a call from the last person they expect: Allyson’s father. He tries to warn them off, but he’s been put under a spell by the kidnappers to keep the victims from escaping. Nothing short of death can stop him. Now Allyson must choose between killing the father she’s always dreamed of, or letting her best friend die for a crime she didn’t commit. 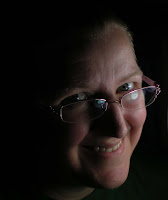 About the Author:
Living as a muggle has brought Rena some levels of success such as completing her master’s degree, but always the stories returned, calling her to the keyboard in the dark of night. Now, having built armies from words, Rena has set her sights on world domination, one book at a time.

From her secret base in the wine country, Rena has enlisted the help of her cats, her loyal dogs, and her family―who can be relied upon to hide the launch codes at a moment’s notice. You can find Rena at her blog, follow her on Twitter, Goodreads, or find her on Facebook.

Wow, love that title. I want to read the book based on that alone! (The summary is just as awesome, too, though!) Also, great guest post! The holidays can definitely be tough to survive sometimes, so this advice will come in handy, for sure...

Some people try to do too much and they are miserable. Slow down, do what you can, and remember to enjoy it.

I love this title! And since I'm very fond of dragon stories, it's on my list to read. The tips are right on, Rena. Great reminders.

Tip #4 should be for all year round, not just the holidays!

Love the cover of this book!!! The title is awesome and it sounds amazing.

Thanks for having me over Tara!

Hi Tara - good to meet Rena and good luck to her and her new book - interesting title. Love the tips too - smile and help others ... and be flexible ... Happy Christmas and festive season to you both - and a very good 2016 - Hilary

Sounds like a great book! Love the description and cover.

Excellent words of advice for surviving the holiday season. I especially like the smiling when in a crabby line one- as we don't know what struggles other people are going through.

The food at this venue was excellent, as was the service, many of our friends and family still rave about it. My wife and I highly recommend Los Angeles event venues. We came here again for dinner and everything was again good and the service was extremely fast.