How's your SUMMER READING going? Love having a little extra reading time! And today, I'm excited to share another review with you...

I give you the first novel in a fun cozy mystery series... 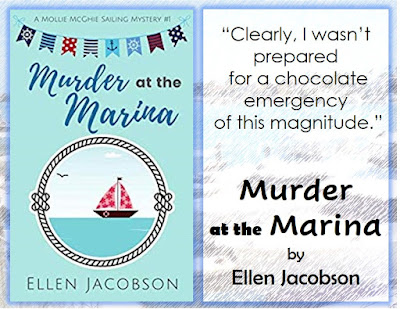 MURDER AT THE MARINA

Mollie McGhie is hoping for diamonds for her tenth wedding anniversary. Instead, her clueless hubby presents her with a rundown boat. She's not impressed.

When she discovers someone murdered on board, things get even worse. Mollie hopes it will convince her husband to rethink his hare-brained scheme of sailing off into the sunset. Instead, he's more determined than ever to fix the boat up and set off to sea.

Poking her nose in where it doesn't belong, Mollie finds herself drawn into the tight-knit community living at Palm Tree Marina in Coconut Cove, a small town on the Florida coast. She uncovers a crime ring dealing in stolen marine equipment, eats way too many chocolate bars, adopts a cat, and learns far more about sailing than she ever wanted to.

Will Mollie be able to discover who the murderer is before her nosiness gets her killed?

Murder at the Marina was a fun, quirky mystery set in a cozy sailing community where Mollie never expected to find herself. With a pocketbook full of sweets and an intuitive feline helper, Mollie leads us on a hilarious hunt for a killer with a motive and more chocolate. I was left guessing who the murderer could be right up to the end. Looking forward to Mollie's next mysterious misadventure!

I love Ellen's books! They're fun and light and a perfect read. Hope you're doing well. :)

I haven't read it but her story in Hero Lost was great.

Loving the warm summery vibe I get off this cover and, well, 'Murder, and Chocolate!', what's not to like?

Thank you so much for the lovely review!