servers dish it out!

A tale of strength and light defeating evil opposition is revealed in CHAMPION IN THE DARKNESS by Tyrean Martinson. To gain a glimpse, you are hereby invited to eavesdrop on two servers in the dining room at Triune Halls...

Breakfast has just concluded with a hubbub of laughter and chattiness. As the youthful crowd disperses to their three halls - shepherd students, sword students, and law students, Tyrean Tilly and Sara Syler clean up the mess left behind.

Sara Syler: *stacks a tower of plates and nods* That apprentice Clara, she thinks she's ready to be a sword master. I think she's got a lot more to learn, eh, Tyrean?

Tyrean Tilly: *wipes a spill* Well, she has been training here longer than most of these young ones, but I doubt she understands much about those swords of power. Seems all those masters get something they don't expect when they receive them.

Sara: That's certainly true. *winks* I've heard rumors about how Master Dantor acted when he got his, but now he's been hanging out with that Stelia. She's so moody, moping around all the time. What's the deal with her?

Tyrean: *wrinkles nose at a stubborn stain* Well, I heard she was raised by that witch Kalidess and the Dark Sisterhood. I can't imagine that's something she's proud of. In fact I'm surprised the Triune Council let her serve at all with the things I've heard about her past. *leans in and whispers* I've heard she burned whole villages under Kalidess's command.

Sara: No, that's horrifying! I can't believe even Stelia would be so bad. She's probably thankful to be here, where she's safe. That Kalidess is evil, but I don't think she'll ever get a hold of our land. Septily is a fine place, a strong place made of seven united kingdoms. Kalidess and any Darkness she threatens . . . Well, I don't believe she or it will ever come here."

Tyrean: I don't know. Having Clara as an extra sword master would make me feel better.

*Clara rushes by the open door.*

Tyrean: There she is now, off to claim her sword.

Sara: We'll surely find out all about it at luncheon.

Tyrean: Oh, don't even mention luncheon! The students are even messier then.

Hope you enjoyed our play! Thank you Tyrean for telling us a little about CHAMPION IN THE DARKNESS! Here are a few more details...

Clara is younger than most trainees, but she is ready to hold a Sword Master's blade. While visions and ancient prophecies stand in her way, they also offer a destiny unlike any other. Clara is aided by a haunted mentor, Stelia, whose knowledge of their enemy Kalidess is both a bane and a blessing. As evil threatens their land, Clara and Stelia must find the strength to overcome the darkness. 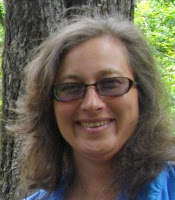 Tyrean Martinson lives and writes in the Northwest, encouraged by her loving husband and daughters, and reminded to exercise by her dogs and cat. Champion in the Darkness is her first book in the Champion Trilogy, but she has previously published short stories and poetry. She can be found online at Tyrean’s Writing Spot.

And here are a couple of giveaways where you can win CHAMPION IN THE DARKNESS!

I love the way you have the servers dishing the gossip, giving us the inside scoop. And YAY for Tyrean's novel being out and ready. Got to make sure I get my copy.

Tara you are always so creative!
Congratulations to Tyrean!

Angela - Thanks! The creativity here is all thanks to Tara!

michelle - I agree. Tara is totally creative, and wonderful! And Thanks!

Heather - Tara knows how to bring out the best!

mshatch - Creativity = Tara. I just filled in the bubbles.

Tara - Thank you for having me here!

Tara, I love your creativity!

You're a true creative. Congrats Tyrean.

That was very clever and unique!

What a fresh spin! And how do you do those cartoons? I can't even find my paint program! (I think I deleted it...oops!)

Wonderful post! Absolutely makes me want to read Champion in the Darkness!

Thanks Tyrean and Tara!

Alex - glad you liked it, but I have to say that the creativity award goes to Tara, the hostess with the mostess.

Elizabeth - isn't Tara amazing?! Her art work is so cool and fun!

Gwen - Thanks! I'm glad it caught your interest! Again, hats off to Tara for making it cool.

I'd feel better with an extra sword master around, too. Congrats Tyrean!

Have a wonderful weekend, Tara.

That was all kinds of awesome! You girls rock!

This was all based off Tyrean's writing! Stop the gushing, girl! You deserve credit for writing such a great piece of work!

Thanks everyone for supporting Tyrean!

Jessie - Thanks!! It was really all Tara's awesomeness!

Tara - yes, but you started the creativity going . . .thanks for having me!

I've this book on a lot of blogs this week. Good luck with it, Tyrean.

And Tyrean, if you want tough stains, you should see what my kids do to the table cloths. They are pure evil. *sigh*

Stina - Thanks! I know what you mean . ..we don't use table cloths in our house.

Love it! Great sneak peek into the world of Champions :)

That was such fun! Love listening to the gossip. :)

Christine - Glad you liked it!

Your creativity never fails to amaze me :)

Yeah, those students are always at fault - messy critters! :-)