Fasten your seat belts and get comfortable for your space flight to join the audience of that outer world, renowned, intergalactic talk show, Tara Tyler Talks, on planet Tartylak! Never heard of it? You must be from Earth. 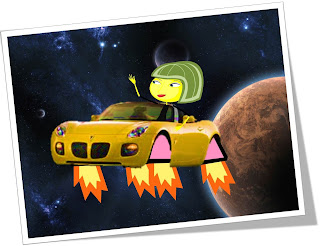 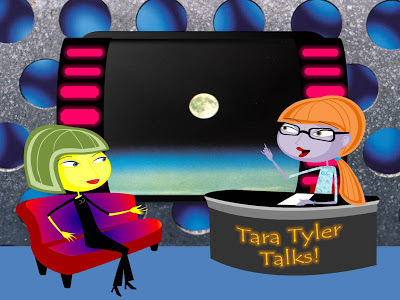 Welcome, everyone! Please give a warm welcome to my fabulous guest, Charity Bradford! *applause*

So nice of you to come, Charity. I am so excited to read your book, THE MAGIC WAKES! You know, I have an aunt who visited Sendek last spring. What's it like?

It’s my ideal world. The people of Sendek have made great strides in technology while also protecting their environment. This means beautiful modern cities with a futuristic look, but also vast areas of wilderness, forests, mountains, rivers and valleys. There are oceans as well, but I’ve not made it to the coast yet. Sendek is a world filled with light. There are two suns and three moons. Luckily the suns are fairly close to each other allowing them to rise and set within seconds or up to an hour of each other depending on the time of year.

One of my favorite things about living on Sendek are the fully computerized houses. No one cooks anymore, food is ordered from the metabolizers. And they have the best medical care, though Talia has never needed any. If only they would look outward and put their science into exploring space.

You had me at "no one cooks!" Sounds heavenly! But poor Talia, she's the only one who knows about the imminent invasion. What can you tell us about the aliens who want to take over? Are they magical?

*shudders* The Dragumon embody all my worst nightmares. Tall, powerful, scaly, and they don’t care about the sanctity of life unless it’s theirs. They’ve been wandering in space for several hundred years trying to get home to Sendek.

Yeah, you heard me right. They were conceived on Sendek long ago by a mage and his best friend, who happened to be a dragon. I really think they meant to help men, but it didn’t turn out so well. The creatures had to be sent away and all the dragon-kin abandoned Sendek too.

I’m not sure, but I think some of these creatures had magical powers before leaving the planet. They’ve forgotten how to use them though because they’ve not needed them. Who needs magic when you can crush human skulls with your bare hands?

Scary! So the people might have time, if they get their act together! You got the scoop on the invasion from Talia, a scientist, right? Will she ever come to grips with her extra abilities?

Don’t tell Talia I’m sharing her secrets, okay? It’s hard to gain her trust and I’d like to keep her talking to me. Talia is a scientist, but she only went into that field of study so she could find the facts to back up her dreams. They’re prophetic, but who would believe in something like that? She’s had them since birth, and let me tell you, they sure leave their mark on her—in more ways than one. I don’t think she even knows all that she can do yet.

Or she doesn't want to admit it! And she has a connection with a Major Landry Sutton. What is his job? How did these two meet? Is he a hunk or what?

*fans self* Honey, I’d take him home. The way those clear blue eyes contrast with that black hair. And when he wears the Royalist uniform! Give me a minute.

Okay, let’s see. Major Sutton is pretty young for his rank, but he’s really dedicated to the royal family. They are his family after all. He doesn’t seem to take much time for relationships, pity. However, he’s been spending a lot of time thinking about Talia. They met at the SEF, the Space Exploration Foundation, where Talia works. When I asked Landry about it, he just said she was under investigation. Right, like she has time to join a political terrorist group!

Now besides covering Talia's story, you participate in other activities. How do you give birth to a novel? and does it hurt?

Sometimes it hurts a lot! More so when you do it on your own. I’ve found that birthing a novel is different for everyone, but one thing is always true—talking about it helps. My good friend Elizabeth Poole and I started this meme in 2011 for Nanowrimo. We decided to bring it back at the end of 2012 with a broader purpose to include anyone and everyone. Every Thursday we post our writing goals and report on how we did with the previous set of goals. It doesn’t matter what stage of the process you’re in, everyone can play. We support and cheer each other on.

What a wonderful venture! Lastly, I'm curious. What happens when you ring a Unicorn's Bell?

Amazing things happen. You learn to see your writing through the eyes of a reader. At Unicorn Bell our goal is simple: Give back to the writing community by providing a safe place to test writing.

When I was sending query letters out, I dreamed of a place to chat with other writers and get their advice… And found it! Carol Coffelt, aka Huntress, came up with this great idea and invited me to join her. I was honored. All seven of us “ladies of the bell”, as I like to label us, are on the same journey as our readers. We hope that by sharing our experiences and providing critiques in small bite-sizes, we can encourage other writers to keep trying. Never give up, and never surrender!

Beautiful sentiment! I think I've heard it echoed in the galaxies somewhere... Thank you so much for taking the time to sit and chat with us, Charity! And thank you, studio audience, for taking the trip light years away to be here! Safe travels home, everyone!

Here are the details for
THE MAGIC WAKES by Charity Bradford

Scientist Talia Zaryn never considered her childish nightmares of an alien invasion and  her death to be real and always kept them secret. But when her mirror image reveals the face of her dreams, she fears they are prophetic. Talia must prove that life exists beyond their planet, Sendek, and hopes her people will prepare to fight.

Major Landry Sutton is looking for a traitor. His ability to sense emotions convinces him Talia is that traitor until a touch sizzles between them. In an instant their minds are connected and they can communicate telepathically. Just as the two begin to trust each other, the invading force arrives.

Talia and Landry must uncover the secrets of Sendek’s past if they hope to defeat these terrifying creatures. And Talia is the key—if only she can learn to trust the magic coursing through her veins.

Anything to do with dragons captures my attention. Best of luck with your tour.
CD Coffelt prowls at Spirit Called

I'd love a metabolizer for my house. Could write some great stuff then. LOL.

I love the names/places that fantasy and sci-fi writers come up with... Sendek and Dragumon... sound great!
And what a great cover!
Congrats to Charity!

What a fun interview! Good luck with your tour, Charity.

Best of luck to you, Charity. The book sounds fantastic!

No cooking? I'm totally there. I love the mix of future tech and magic. I can't wait to read it. =)

So much energy! What an awesome interview!

Sounds like an awesome book! I love planet Tartylak too!

@Alex yep. UB was Huntress' brain child and the rest of us just followed a long. It's been a wonderful experience.

@Romance Reader, you've got that right! And then clean up is easy too since you just stick it all in the recycler.

@Michelle thank you! I spend so much time thinking about these names. Sometimes they just happen, but not usually. :)

@MJ Fifield we put our greatest desires in our books, right? :) I love to cook, but not all the time so there is a metabolizer and some real cooking in the story.

@E Arroyo hope you like it! I'm still waiting for your book to show up in my mail.

@Heather, @Sheena-kay, @MJ Joachim thank you so much!

I so want a reality where cooking is a thing of the past!

lol. Oh, to not have to cook!
This books looks amazing!

Great interview. The Magic Wakes sounds intriguing. See over on the Bell.

What a great interview! I can't wait to read Magic Wakes. Congratulations, Charity!

Hi Tara!
Welcome to the A-Z Challenge! I'm totally intrigued by this book from your interview. I love these kinds of stories...but it will have to wait. The job of a co-host doesn't allow a lot of free reading...but I'm bookmarking the page for stocking my Kindle for summer...

@Rena, please do visit us at UB.

@Elizabeth and @Ashley, me too!

@VikLit thank you! And Tara's illustrations are great.

@Tina you are a saint for helping with the A-Z Challenge! I'm looking forward to participating this year too.

Awesome interview! I loved it :) Can't wait to have you at my place, Charity!

Fantastic interview! I'd love a house that would do everything too. To never cook again, ah, sounds so lovely.

What a great interview from you two very creative ladies! Sounds like Charity's built an awesome universe, and dragons involved too - very cool. Congrats and best of luck with Magic Wakes!

Tara- You crack me up with these illustrations.

Charity- Your book is already on my TBR list. :)

@Marcy me too! I'm looking forward to it.

@Christine we're getting closer with all these "smart house" upgrades. Now to make them affordable.

Would you be interested in being a "Minion" for me and the "A to Z Challenge"... let me know.

If one of my other Co-Host have not snagged you up yet?

Had a great time with Charity here!
Thanks for participating! Looking forward to reading the book =)

Thanks Livia and Elliot!

Thanks again Tara. I loved your fun format.