What's in the Soup?

Today I welcome Mary Pax on the release day for THE RIFTERS! She's like the old woman who lives in a shoe - she has so many books out! But she's not old and lives in slippers... but I'll let you read more about her in this fun interview...

What was your worst subject in school?

I had a really time with math once I reached Algebra. I usually stayed after school or met my teachers during lunch for extra help. I’d struggle most of the school year, then pass the state-wide final with 95% or better.

Aww. I would have tutored you. And that's a great result!
Can you share an embarrassing moment?

Hmm, in grade school, I ate everyone’s tomato soup at lunch once. I loved tomato soup... until I got sick. Really sick. I didn’t eat tomato soup for years after. I eat it now, though, and love it again.

Too much of a good thing...
Would you tell us about your favorite critique?

It was good rejection that led to my publishing career. Good critique has definitely made me a better writer.

That's the best! I live for feedback.
Does your family have a favorite line or saying?

‘Black Creek’ - refers to a story told and heard way too many times started by my father who told us his story about rowing up Black Creek (off the Niagara River in Ontario, actually) with his brother as a kid. That was it. There’s nothing else to the story. But he told us thousands of times.

I think every family has a story that goes no where like that, but always gets a laugh when it's mentioned.
Here's a curious question, What's your favorite cliché?

I suppose I live one as a writer who’s in my slippers most of the day living a fairly solitary existence. I don’t drink much, though. Just a celebratory beer when I finish a novel. And I had to give up caffeine.

Slippers are awesome! And I'd get so much more done if I had a solitary existence... but no caffeine? AHHH!
If you could travel through time (like they do in the Rifters) where/when/why would you go?

I would travel to Sumer and the dawn of civilization, because I am obsessed with Sumer. I have been since I read Gilgamesh in a lit class in college. I have fifteen books on Sumer including collections of their literary work (the birth of written fiction) and workbooks to learn Cuneiform and another on Sumerian grammar. Yeah, obsessed much. lol

That's quite a unique obsession!
Thanks so much for stopping by, Mary! And I love the sound of your book - always like to read about other's images of time travel or other sci-fi stuff!

THE RIFTERS by M. Pax: 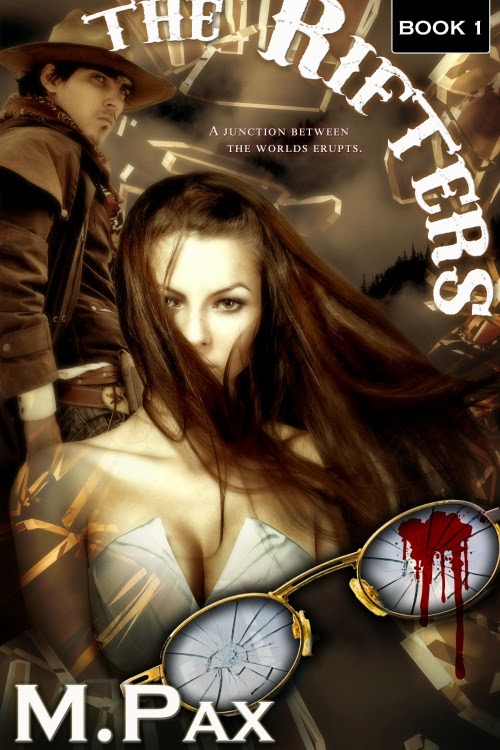 The Gold Rush trickles to a fool’s quest and a string of stagecoach heists. In 1888, Earl Blacke decides to make a new start and become a better man. He escapes into the mountains, heading north. In the wilds of Oregon, a rift inside an ancient volcano opens and sends him into the future, into the present day. It also shaves forty years off his age, forty years to live over again and atone for what he’s done.
Starting over is hard to do.

In current day New York, Daelin Long’s dream job at a publishing house goes the way of the dinosaurs her sister chases. With no money and nowhere else to go, Daelin accepts the librarian position in her sister’s dinky town in the middle of Oregon. Nestled inside ancient volcanic peaks, the town of Settler holds onto many secrets. Residents roam the streets with weirdly fashioned devices, and odd lights pulse in the night skies. People whisper of a phantom outlaw and start dying, murdered and missing their heads. On top of it all, Daelin’s sister is missing, and Daelin doesn’t know who to trust.

Earl knows more than he’s saying. He shares a notorious history with the phantom, one he’ll see remains buried. Keeping Daelin’s sister’s secrets is his only chance at redemption, and the only way to keep this world safe.

And to start, Book One is free!
Download from:

Plus, take advantage of the preorder special on Book Two, THE INITIATE. Only 99 cents via preorder from Amazon, iTunes, B&N, and Googleplay. Preorder 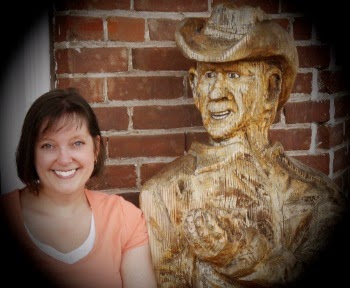 Author Bio: M. Pax-- Fantasy, science fiction, and the weird beckons to her, and she blames Oregon, a source of endless inspiration. She docents at Pine Mountain Observatory in the summers, and one of her cats has a crush on Mr. Spock. You can find out more by visiting her website: mpaxauthor.com 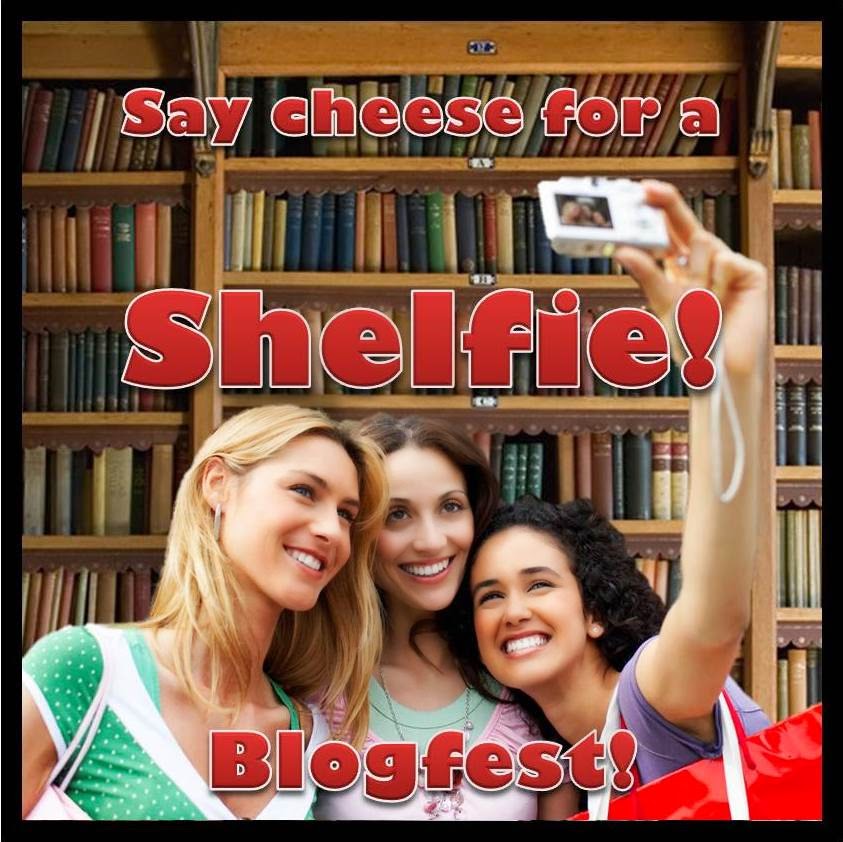 a Rafflecopter giveaway
at 6:30 AM

Nothing like puking tomato soup! Congratulations on your latest, Mary.
And I posted my Shelfie today!

Hi Tara and Mary - love the thought of you slurping everyone's tomato soup - no wonder you were sick and put off for ages!

Your Dad and his Black Creek tale .. fun to think about ..

The Sumers - I think you are obsessed!

Awesome interview, Tara and Mary! I loved Mary's obsession with Sumer and learning more about her as an author. Critique is vital for our growth within the publishing industry.
I'm a total cliché when it comes to pajama pants and comfortable surrounding when I'm writing. The only time I get dressed up is when I'm engaging with people at book signings or school author visits.
Best of luck with your release, Mary. I now have two of your books awaiting me in my Kindle.

Great interview! I love learning more about my favorite authors! Best of luck!

I was going to tell you that Alex did his Shelfie but I see he already let you know. :)

Stormy will put up another today to inspire and share.

Can't wait to read the book. It's waiting on my Kindle. Funny how getting sick after eating something turns us off of a food for years and years.

This interview was lots of fun!

I love Mary! Too bad she can't come hang with us in Huntington.

Living the cliche! I love it.

What a fun, interesting interview! The book looks awesome.

This brought back bad memories of when I got to algebra in school. I had been so good at math until then LOL. I could have used you as a tutor, Tara.

I never did well with math, either. I was so happy the day I completed my very last math class.

Great interview...Looking forward to checking out the book.

Thanks for the feature today, Tara!

I'm glad I wasn't the only one bad at math. Pajamas are nice, but I usually dress.

I'll be taking my shelfie soon...

Fun interview!
I was always a mathematically-challenged person... and still am.
Sumerian civilisation is regarded as one of the earliest urban societies to emerge in the world... no wonder Mary is obsessed...
The Rifters cover is awesome!

Apparently, there are a lot of math-phobics in the writing community. *Whistles as she walks away*

Of course an interview done by Tara would put a smile on my face. If Sumer were a person Pax you would be a stalker. LOL. Congrats on your new book and writers often lead solitary lives for various reasons.

Congrats on Rifters, Mary! I enjoyed reading it!

And I finally got my shelfie pic up on my blog and facebook.

congrats to Mary! I too sucked at math (although I was okay in algebra. it was all other math that gave me trouble!)

Great interview Tara and Mary! Geometry was my favorite math class, because the emphasis was on memorizing the definitions. Congrats to Mary, and I love the cover!

It's funny that caffeine and alcoholism seem to be the cliche about writers. I do need caffeine to wake my brain up (although so do all the non-writers I know), but I don't know any writers who drink all that much. Just the occasional drink when relaxing, like most people. I do live a slipper-full existence, though! I'm still in my PJs and it's 9:45 a.m.!

A Beer for the Shower said...

Awesome interview! I bet tomato soup looks the same going in as it does coming up, doesn't it?

I love your interviews, Tara! You always have the best questions.

Mary, tomato soup *snort* I love it, too. With crackers.

Major congrats, Mary! You are on a roll with your awesome books. :D

I always loved Gilgamesh, mostly 'cause of his awesome name. :D I studied ancient history, mythology, etc., during my undergrad, and loved it all.

Congrats Mary and I would have a hard time with tomato soup after that myself.