Don't let the holidays suck the lifeblood out of you!

Merry Christmas, et al. I have two gifts & a giveaway for you all!

First, I wanted to write you all a Christmas poem. It's not really about Christmas, but it's in there... so here you go!

To Mulberry Lane,
In Sycamore Square,
Moved a handsome new family
With skin oh, so fair.

Respected, adored,
Admired by many,
They had wealth to spare
And flaunted it plenty.

In the spring they threw parties,
They lit up the night,
A few lucky chosen
To stay until light.

In summer they vanished,
They left the harsh sun,
Facebooked from down under
To show off ski fun. 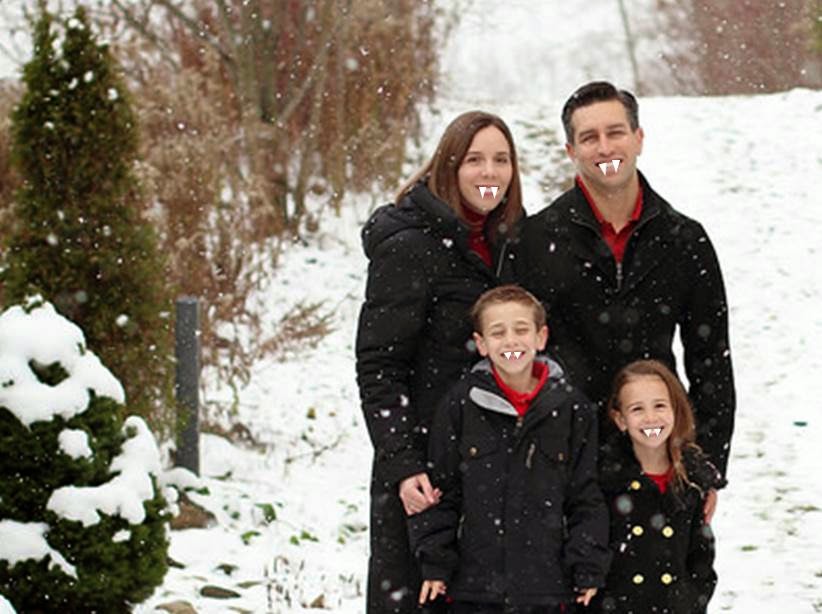 When weather turned cooler,
Guess who reappears,
In time for fall fests
And Halloween's spooky fears.

But as winter approached,
The neighborhood thinned.
Where's everyone gone?
Asked the lone, chilling wind.

The family laughed
So full and so jolly.
Christmas wishes were granted
By vain human folly.

When New Year arrives,
The Jones will be gone
To another quaint village,
Fresh blood to feed on.


The Second gift I have, is the lovely and talented, Sharon Bayliss! She has a fun, "You might be..." post to celebrate the coming of her next December People book, WATCH ME BURN!

Dark wizards living in the Mundane world have a lot of challenges. Here are some signs that you might be one of The December People...
Begin the series with Destruction for only 99 cents (12/1-12/21 only)!
Semi-finalist in the Kindle Book Review Awards and #1 category bestseller in coming of age fantasy.

DESTRUCTION
David Vandergraff wants to be a good man. He goes to church every Sunday, keeps his lawn trim and green, and loves his wife and kids more than anything.

Unfortunately, being a dark wizard isn't a choice.

Eleven years ago, David's secret second family went missing. When his two lost children are finally found, he learns they suffered years of unthinkable abuse. Ready to make things right, David brings the kids home even though it could mean losing the wife he can’t imagine living without.

Keeping his life together becomes harder when the new children claim to be dark wizards. David believes they use this fantasy to cope with their trauma. Until, David's wife admits a secret of her own—she is a dark wizard too, as is David, and all of their children.

Now, David must parent two hurting children from a dark world he doesn’t understand and keep his family from falling apart. All while dealing with the realization that everyone he loves, including himself, may be evil.

WATCH ME BURN
David Vandergraff lost his home, his job, and contact with his oldest son, but remains determined to be a good husband and father despite being a dark winter wizard.

His resolve is tested when a flyer for a missing girl--who happens to be a summer witch--begins to haunt him. David believes a spell needs to use him to save her, so he follows the magic's command and looks into her disappearance. His teenage daughter Emmy resents him for caring so much about a random stranger. But when she uncovers some disturbing evidence close to home, she begins an investigation of her own.

David and Emmy quickly learn that the mystery is not only about a missing girl they barely know, but a deeply personal story that impacts everyone they care about. As their world crumbles, they fear the warning may be true—never mess with summer wizards, because the good guys always win.

And lastly, the GINORMOUS GIVEAWAY!

My good buddy, Andrew Buckley from Curiosity Quills put together a colossal Christmas giveaway. It's a chance to win one of 24 awesome books!

I'm helper elf, Twinkle Fluffenguff, offering POP TRAVEL and BROKEN BRANCH FALLS. Sharon, aka Giggles McJinglebell, has DESTRUCTION in it as well! Check it out!

MERRY CHRISTMAS
TO ALL!

AND A HAPPY NEW YEAR!!

Email ThisBlogThis!Share to TwitterShare to FacebookShare to Pinterest
Labels: behind the book, giveaways, poetry

Someone by the name of Jones moves next door to me, I'll check for fangs.
Congratulations, Sharon!
And have a great Christmas, Twinkle Elf.

Tara, that was a fun poem :) I'm sure you make a good Twinkle Elf. So cool.

Merry Christmas to you both.

That was a great poem. Merry Christmas to you!

My goodness you've covered all the important points!

Love the poem, and Sharon is a wonder, but that book give-a-way so very, very awesome!

Have a very merry Christmas! :)

I love that poem. And Sharon's book looks great. Her list of dark wizard problems made me chuckle.

Loved the poem. Sharon's books sound super. Will add them to my TBR list.

Happy Holidays, Merry Christmas and a Very Happy New Year to you and Sharon.

Congrats, Sharon.... All the best!

You all look lovely in those fangs. I'm sure you were a hit at the holiday parties. I'm watching for you because I live just outside a quaint village.

What a great poem. I hope you had a great Christmas!

Terrific poem. Wishing you a wonderful holiday season and a happy new year.

And I love the sound of Sharon Bayliss's books. Fun times :)

Happy New Year's Eve. Wishing you all the best.

Happy New Year to you and your family, Tara!!

That was a fun poem!

Fun poem! Plus, the picture is awesome too!

Super fun poem and that family photo is priceless!