CONGRATULATIONS to PATRICIA JOSEPHINE!
She's been writing for 10 years today!
And to celebrate, she's set up a Scavenger Hunt. Find the word in the blurb and head over to her blog for the list of other participants. When you've collected at least five, go back to her blog and comment on the post "Happy Birthday AND Anniversary" to be entered in the GIVEAWAY.
TEMPTING FRIENDSHIP by Patricia Josephine 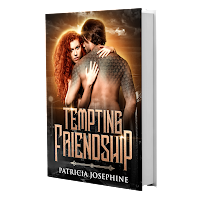 No human can resist Keane, so why can Quinn?
Keane is an incubus coasting through life without a care. It’s actually pretty boring. Then he meets Quinn, a human who can resist the allure of an incubus. That shouldn’t be possible. He’s going to have to use all of his wiles if he’s going to seduce her.

Quinn is less than impressed by Keane. He’s too cocky and has sex on the brain. A typical male, and her complete opposite. Despite their differences, they can’t deny the attraction between them. Can a human and an incubus make a relationship work?

But something sinister is lurking in Keane’s world. Incubi are vanishing, and when Quinn is kidnapped, Keane realizes someone is after him. He races to uncover who is behind the abductions and find Quinn. Will he get to her before it’s too late? Or is their tempting romance doomed?

​AVAILABLE FOR $3.99 AT AMAZON OR READ FOR FREE IN KINDLE UNLIMITED!
Add to Goodreads
Happy Hunting!
at 6:00 AM

Thanks for helping me out, Tara.

Hi Tara - Patricia's story has conjured up an interesting urban fantasy ... so pleased for her - congratulations and all the best to you both - Hilary