A Tail with a Twist

My wonderful friends, Leigh, Cassie, Mark, and Morgan are hosting a fabulous blogfest - Fairy Tale Madness! Here is my entry in the Twist category. Though it's also funny =D

The three brothers Swine, protectors of Happy Valley, just finished defending the chickens from the weasel gang. After a long battle, they were ready to call it a night. 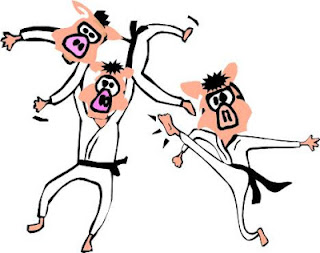 Flinging his stars into their block, Shuri said good night first and entered his hut made of straw. Katan shook his head at his youngest brother’s poor choice of building materials, but Shuri said he needed fresh air to sleep.

After swinging his nunchucks around, Chaku kicked open his door, showing off. His crude cabin made of sticks was no sturdier than Shuri’s hut of straw. Though skilled ninja fighters, both of Katan’s brothers could use a lesson in humility and practicality.

As Katan reached his strong house made of bricks, he picked up his newspaper, unlocked his door, and went inside. The headline said, “Wolf Breaks Out of Jail!”

The Wolf would head straight for the Swine brothers who put him away. Katan had to warn Shuri and Chaku. He called Shuri first.

Chaku picked up on the first ring.

“Shuri is here and so is the Wolf.”

“I’m on my way.” But before Katan hung up, he heard knocking. “Chaku? Chaku!”

“Not by the hair of my chin!” After a crash, the line went dead.

Katan rushed outside. His brothers came running with the Wolf on their tails. The three brothers locked themselves inside.

“Do your worst,” Katan said and the Wolf began to blow. The house stood firm.

Each exiting a different way, the brothers surrounded the huffing, puffing Wolf. Shuri flung a star at his butt, Chaku whacked him with his nunchucks, and Katan thwacked his nose with his long sword.

The Wolf howled all the way back to the Pen.

For you ninja enthusiasts, here is where I got the ninja piggies' names:
Shuri for shuriken – star discs
Chaku for nunchaku - nunchucks
Katan for katana – long sword

Hope you enjoyed. I had a great time writing it! Will do my best to visit around the other entries this week. 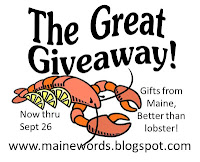 Have a good one!

Ninjas! I like it.
Thanks for mentioning my blogfest reveal today!

wittle ninja piggies!!!! I love it! And you never fail to make me giggle. :D

I almost wished the bad wolf had broken into the song "Ninja pig, Ninja pig."

Hilarious! Those pigs are excellent butt-kickers. Howl wolf, howl! Check out My Entry.

Original and lots of fun!
The butt-kicking swine are too cool! The wolf got what was coming to him! LOL.

Only you could pull off a story with ninja pigs :P Great job!!

Very cute and I love how you came up with their names.

great story and thanks for the shout out :)

That was so much fun! Hehehe! Ninja pigs! I jumped right on that Chocolate blogfest. Mmmmm.

What a fun story, I love the ninja pigs concept! :D

lol, I almost felt sorry for the wolf! ;)

LOL! Brilliant! I haven't read another one with the 3 Little Pigs yet, so this was fun. Particularly the "ninja" part! Go TARA!

so glad you guys got a kick out of the ninja pigs! ha!

hope, i am doing very well! tho just under count each day. need a big day to make up for it!

I knew it would be fun just by reading the title! ;)

I'm hopping over from GUTGAA and just wanted to get a head start on visiting some new blogs. Nice to meet you and you have a lovely blog...

You had me just from the title and pic. Awesome! :)

Love the concept and the illustration ... such fun!

My Ninja-loving boys would love this version of the Three Little Pigs!
A2Z Mommy and What’s In Between