Here, my dears, is the second wild tale for the "What I did last summer" blog hop.

A couple of cute guys sat across the aisle from Nicki and Ginger. Chatting about their spur of the moment flight, they found out the guys were staying just down the beach from them. Maybe they would see each other. 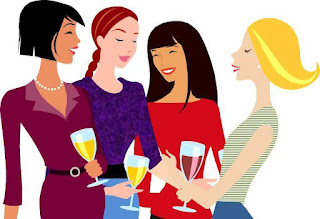 After checking in, the girls waited for Ginger’s two stewardess friends, Kat and Dale. As soon as they were settled, they walked down the street to a beach bar and right away some young, blond surfer dudes bought them drinks. One said he was a lifeguard but the girls didn't believe him. Dale was hilarious and even funnier drunk. But she almost caused a fight between some bikers and the surfer dudes. To fix it, she dragged one of the surfers into the ocean with her with their clothes on.
Having enough of that place, the surfer dudes invited the girls to an amusement park and they had fun on the rides. Dale and Kat were tired so called it a night, but Nicki and Ginger went dancing with the boys. At the club, the music wasn’t very good so they left and told the boys they would see them at the beach the next day.
Surprisingly, the one boy really was a lifeguard and he posed for some pictures. While the girls played Frisbee, they met some more boys, visiting from New York with dark hair and thick accents. The girls turned them down for dinner. For one thing, they were too young and for another, the girls had plans to go see their friends’ band that night, the whole reason for the trip.
Though the dive where the band played was dead, the girls had a great time dancing anyway and silly Dale even jumped up on stage with them. When it was over, the guys gave the girls a ride back to their hotel in the back of a pickup truck. Nicki felt sick so she went to the room while Ginger, Kat, and Dale found some other guys at the hotel to play with, stealing a cot and cramming it into the elevator. Meanwhile, one of the New Yorker boys got the girls' room number and went to keep Nicki company.
Hard to wake up the next day, they checked out and said their good byes. With time to kill before their flight, Nicki and Ginger walked the beach and ran into the guys from the plane. They took the girls to dinner and flew home with them on the same flight back. Getting their numbers, they said they’d call.
What a weekend!

So, that's two fun stories. Which is true, which is false and it should be easier to figure out who I am now. Reveal and a picture of the true story on Friday. Thanks for reading! And thanks to  Emily King and Melodie Wright for the bloghop!
at 6:27 AM

This is wild fiction....

I'm leaning toward this being fiction and the first one being true.

I didn't read the other one, but this one sounds out of this world crazy, so I'm betting on true :)

I’m going to guess that this one is Fiction.

I think the first one is true and this is false. But they're both great stories!

Okay, I have no idea, so it will be a stab in the dark. First one TRUE, this one FALSE. There, I made a decision! :D

I think this one is false. Still a fun story though.

Wow, an amazing story. This one is wild and I am going to vote fiction. It's a hard call.

I say fiction. The first one is fact. We'll see.

Fun times! My guess for this one...fiction?

I have no idea!
Going to close my eyes and say: this first one is false, this one is true.

I'll guess fiction for this one. :)

Hmmmmm, I'm going to say this one is fact because you can't make up dragging a cot into an elevator!!! LOL

I think this one is true and first one is fiction.

This one Fiction. The other one is Fact.
Sounds like a good time.

Ugh! Tara you made this so hard!!! I'm guessing true on this one. And I love your pictures on both.

Oh man, I'm totally guessing here. I'm going to say this one is fact and that other fiction. Way to keep my guessing:)

I want to hang out with surfer dudes and have them pose for pictures. I have no idea which one is true.

You're -----Ginger! And the first story is true:) Wait, were you ever a stewardess?

That was one crazy weekend of guy meeting. Woot!

yay for all the comments and votes!
excited for reveals on Friday!!!

Okay, I'm going to go with this one is true and the other is false. But you make it tough to decide confidently. Great stories :)

I just had to read the story that goes with the picture. What a trip, indeed! Ahhh youth.