This week, I am participating in the "What I did last summer" blog hop, hosted by the splendid duo, Emily King and Melodie Wright. I offer you two of my stories. One today, one on Wednesday. Try to pick the one that actually happened. (my GUTGAA post is going up Tues)

One is false, one is true,
which is which is up to you!

A Night to Remember

Erika stole the show. In a cute white mini dress dotted with sequins and a petite veil, she drew all the attention. And hated it. 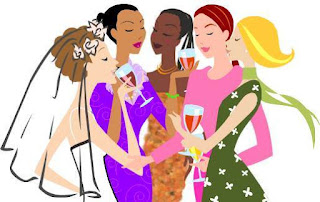 At dinner, the gorgeous Italian hunk of a waiter lavished Erika with compliments. Even offering to take the groom’s place. Overconfident Brenda's flirtations were flatly rejected, though she denied her interest.
After dinner, the five friends surprised Erika, taking her to a pool hall. They got a kick out of being all dressed up at such a low brow establishment. Until two muscle heads swore they recognized Erika. When they grabbed her by the arm, the bouncer and a couple of sweet guys rescued her. Erika was ready to call it a night but they hadn’t gone dancing yet, so she gave in and went.
On their way out, the girls ran into friends that played in a band. The guys invited the girls to an out of town show. Nicki and Ginger said they would be happy to take a road trip and play the groupies.
At the dance club, they knew the bouncer so the girls waltzed ahead of the line outside, passing one of Erika’s old boyfriends who told her to save him a dance. She wished she had gone home. Her fiancé was insanely jealous and probably sent one of his cousins to spy on her.
Inside, Erika spotted a coworker dressed in a skintight, leopard-skin mini skirt and fluorescent orange halter top. She kept her job a secret from everyone and hated running into her stripper friends in public. So embarrassing.
Erika steered away from them but Brenda taunted them and almost caused a cat fight. The strippers backed off for Erika's sake. Escaping catastrophe, the girls got the DJ to play Erika's favorite song and they had fun dancing for a while.
Until Erika had to fend off her ex-boyfriend's attempts to kiss her and Brenda stole a kiss from the guy her roommate Jamie liked and ditched them.
Consoling Jamie, the remaining girls enjoyed a hardy breakfast in the wee hours before the sun came up. Crashing at Nicki and Ginger's house, Erika slept happy, relieved that her bar hopping days were over, but would miss going out with her crazy friends.

Did that bring back some memories of your crazy twenties? Just wait! There's more to come on Wednesday! Hope you'll join me for the next installment! (ps - names changed to protect the mischievious! for more fun - guess who I am!)
*** And don't forget to enter my blogaversary contest! Going on thru 9/6 ***
And happy Labor Day!
at 6:39 AM

I'm REALLY glad my wife didn't do any of that the night before we got married!!

Now I'll be thinking all day about which character you are. :)

Hmmm. Gonna have to wait till Wednesday to decide.

Hmmm. I'm thinking maybe I did my twenties all wrong. =)

It's been a while, but yeah, that sounds like the roaring 20's. Which one were you, lol! Cos' I'm totally believing this story:)

Wow! Wild women! I think this is totally possible, but I hope it isn't true.

Wow! You've seriously got me wondering about which wild woman you might be . . .I'll be reading Wednesday's post closely.

I love that Erika's fiance is jealous but she's a stripper!!! I LOL'd at that. (i did read that right, didn't I?)

Humm, I can’t decide what I think about it being fact or fiction…
~Aidyl

A very well written essay, Tara! I could imagine myself in the story! :)

I ditto Alex's thoughts, though for myself. Funny story. But that would have been exhausting.

Ooh, mysterious. I have no idea on this one. Will have to wait and see.

Is Erika a stripper? From the coworker description, I can't tell!
But now I want to know!
And I have no idea if this is true or not. Eep!

Hmmm... could be true! Could be true! I'm going to say FALSE, though, just because I feel like making a decision. :D

This one could go either way for me but I'm going to guess Fiction.

This is a TOUGH one. Can't wait to find out what it is :)

Let's see - eeny, meeny, miny, mo - which way will my decision go?
Sounds like... okay, I think I'll wait for the other piece first.

I changed my mind. I think it will be more difficult to decide when there are 2 stories.
This is... TRUE!

As I was reading I kept trying to imagine which girl you were! I look forward to the next post!

This is hard! I'm waiting till Wednesday :)

Okay wow. I can't even imagine. I'm so not a party girl. I'm waiting until Wed. to cast my vote.

I’m going to guess this is Fact. ;D

I say fact. What a crazy night, poor Erika.