Popping Down Under to Disney!

I know, that would be taking the long way. But today I am taking the Pop Travel extended Blog Tour to Trisha's place W O R D S + S T U F F, talking about Disney, and she is from Australia. I hope you have a chance to stop by!

When I asked what she was up to, Trisha said, oh, you know, working on some WIPs. But she's also in a BAND! And they just released their debut album!

Here are the links:
Woody's a Girl
Listen!
and here's an interview the bandmates conducted
(love the word, bandmates!)

Congrats, Trisha! And thanks for having me for a post today! 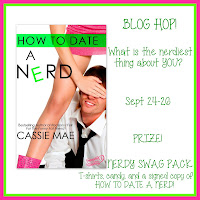 And this just in! (because I just discovered it!)
Cassie Mae's How to Date a Nerd is coming out Sept 24 and she's hosting a totally nerdy blog hop! She has some great nerd alert prizes! You know you want one. Go check it out!

a Rafflecopter giveaway
at 7:30 AM

I have always been a Disney fan, I will pop over and see what's up. Was that a nerdy enough comment?

Just posted the post for today :) It was fun having you over especially talk about the super awesome topic of Disney! :D And thanks for the plug. ;)

Thanks for mentioning the blog hop!! I just signed up for it and I'm already thinking of somethings (: I'll be sure to check out the post (:

Lots of fun and exciting stuff going on including your book tour!

Ah, being in the band, so much fun/work/stress/awe/wonder/practice/joy.

I'll go check it out!

Playing in a band always sounds like so much fun. What a creative person...

We do like to mix our writing and our music! It only makes sense!

Cool info about Disney World on Trisha's blog. I really enjoyed the post. :-)

Just read your post at Trisha's! And yay for Cassie! :)

Going to pop on by and super interested in Disney talk. Read about Trisha's band on her blog and I'm in the Nerdy hop.

How interesting and exciting. A post full of ideas and things. :) Writer’s Mark

I'm off to Trisha's place now!
Writer In Transit