This is actually a great topic for IWSG Day.

I am hoping everyone can find something they like about themselves today. What are you good at? What part of writing do you do well? You are a writer because something good in you helps you tell great stories! Celebrate it!

And so, here is what I'm thankful for today... a little about me.

Not many folks likes to list positives about themselves... But we should! We should be proud of ourselves, have confidence in what's good about us, and share it! It's easy to self-criticize, but we should see what is positive, build on it, and show the world.

We need more happy people--but first you need to be happy with yourself!

So, I'm thankful for my creativity and my drive to help others. (We are not listing negatives today, my list of ways I want to improve would be too long!)

I get creative with my promotion and my teaching... Here are a couple of pics. 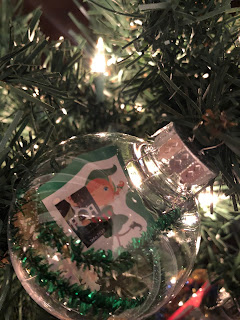 my books in ornaments 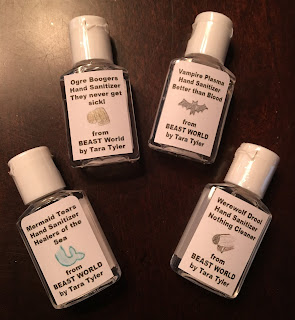 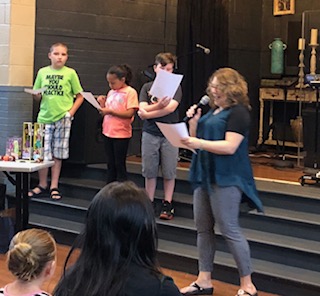 we do a play at my presentations

You are here for a reason - Your life is important - Share your goodness!

Dave didn't know he was lonely until his friends pointed it out. But when he gives in and tries an online dating site, something catastrophic happens - talk about a bad omen.
(Previous episodes)
The Day Dave Broke the Internet
by Tara Tyler
RECAP 15:
"Don't worry, Dave has a plan."
Dave's eyes widened. He wanted to make a plan, but with the pressure he couldn't think straight. Everything was spiraling into mass hysteria. Looking around at his friends, he knew he couldn't let them down.
"Of course I do."

When they reached the farm, dusk settled in the western sky.

Opening his eyes, Dave blinked as they took a turn down a country road. When he tried to sit up, he noticed his arm was asleep. So was Sharon, on his shoulder. He wasn't about to wake her just to get his circulation back. She looked so peaceful. And beautiful. Why did it take an apocalypse for him to find the girl of his dreams?

The quaint farmhouse sat on a small hill. The sun setting around it gave it a pink glow. A large lone oak stood in the front yard, and a barn stood firm in the background. The serene setting sent rest of the world's problems a million miles away.

As they drove up the driveway, a hound dog came bounding toward them barking at the strangers who didn't belong in his territory.

Sharon stirred at the sound and looked out the window. She smiled and stretched.

Jack jumped up on Dave's door still barking fiercely. The dog's spit and breath smeared the window. Harmless. Sure.

A fifty-ish, rugged woman in jeans and a flannel shirt stepped onto the porch holding a shotgun cocked on her hip.

To Dave's relief, the dog instantly obeyed her call. The woman stood confidently and cradled the gun in her arms as she scrutinized the strange car and its contents. Sharon must've gotten her affinity for weapons from her aunt.

Sharon stepped out and stretched. "Hi, Aunt Jessie. This is Nathan and Kitty and Dave." She linked her arm through his as she said his name.

Immediately, Dave was transported into another reality. Not a care in the world. Just him and Sharon on a secluded farm.

Aunt Jessie nodded. "I had a feeling you'd be along soon and probably wouldn't be alone. I can't believe what they're saying. My television doesn't work so well. I get some news, the weather channel, and my food shows, but that's about all."

"News is up? What news?" Dave palmed his forehead. "I wonder if it's CNN. They're based in Atlanta--out of range of the cities that were hit!"

They rushed into Aunt Jessie's living room, and Sharon flipped on the news.

"The military is sending information and aid to the effected cities. They will be helping stores ration out what they have to avoid looting. Spreading the word of our current situation to those in the areas without power and communications is our top priority. The military can't do it alone. Citizens need to help. The best thing to do is remain calm."

Nathan started to pace. "They're going to need a better plan. Those EMPs crippled those cities. Transformers of that size aren't going to be up and running for years. They have a good starter plan for now, but they won't be able to sustain all those people for long. And they have no idea what's going on."

Sharon's aunt put her shotgun in a corner and sat down in a rocking chair. She shook her head.

"I don't see what all the fuss is about. All y'all need to deal with the facts. Stop worrying about what you don't have and make do with what you do have."

The older woman was so simple, yet so wise. She was right. Worrying would get them nowhere. No wonder Sharon had such a good head on her shoulders.

"I agree with Jessie."

Sharon smiled at Dave, while Nathan scrunched his brows. "You do?"

"Of course. The government needs a long-term plan for everyone while they wait for their lives to return to normal. They need a new normal. Getting people out of the cities is really the only way they'll be able to survive. With everything they've depended on blasted out of their lives, it's a devastating shock, but they'll have to come to grips with starting over from scratch."

"How would we convince anyone of that?" Kitty asked, not convinced. She crossed her arms and frowned at her down-home, back-country surroundings. Culture-shock was an understatement.

"Well, think about it. The stores will run out of food. Most farms will still function. But gas, and therefore transportation, will be limited and most likely run out as well. There's no way to provide food to the millions of people in the powerless cities."

Sharon nodded. "Not to mention water and waste. There won't be any functioning utilities or hospitals. If they stay, they'll turn on each other. Many could die waiting for help."

Aunt Jessie huffed. "It all sounds far-fetched to me. Who would want to live in a stinky, dirty city to begin with?" said the woman who was covered in dirt from planting seeds in the earth and shoveling animal refuse. "If any of 'em wanted to work my farm, I'd welcome the help. But they'd have to put their backs into it."

Again, the sage woman sparked an idea for Dave.

I am also thankful for your creativity and your drive to help others!

Yes! We need to celebrate what we do and who we are.
Thank you for sharing your creativity with us!

I'm guessing by this point I'm not gonna get zombies in the apocalyptic story? LOL

Hand sanitizers! What a great idea.
Thank you for sharing.

You're right. We should be thankful for ourselves. Proud, too. I'm thrilled that I'm a published author...and grateful, too.