I recently finished THREE DAVES by my lovely friend and author, Nicki Elson! Before I let her take over with a revealing guest post, here is my short review! 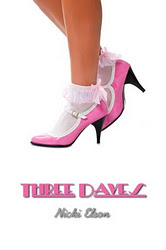 THREE DAVES is the tale of a spunky 80s college girl who blossoms into a wise 80s woman. It's funny, unpredictable (except the end, I knew it!) and full of real emotions. Jen (not Jenny) gets herself into embarrassing, exciting, and enticing situations with surprising twists, 80s memories and a satisfying wrap up.

Nicki does an excellent job making us feel for Jen. We grow to understand the true meaning of love right along with her! I totally recommend THREE DAVES!

Now for a glimpse into how THREE DAVES came about, here's NICKI!

When you write realistic fiction, particularly realistic fiction that mirrors your own life in any way, the inevitable question is---how much of this is true? I had more than one college roomie nervous to turn the pages of my 80s era collegiate story. But as I've assured everyone I know many, many times, Three Daves is fiction...with bits of truth mixed in.

I think pieces of us find their way into everything we write, don't you? And since Tara asked so nicely, I'll let you in on some of the ways I worked truth into my fiction.

Places:  The fictional Central Illinois University is heavily influenced by my real life alma mater, Eastern Illinois University. Everything's been renamed, but anyone who went to EIU will be able to pick out the dorms, the campus buildings, the bars.  As a matter of fact, the bars frequented in Three Daves were even a trivia question in the EIU alumni newsletter last fall!

Paraphernalia: In my acknowledgements, I thank my friend Ed for driving the silver Sapporo---missing passenger sidedoor and all---that David eventually drives in the story. Crappy cars were such a staple of college existence that I couldn't resist. My real life roomate's ginormous Oldsmobile also makes a showing. Of course bomber jackets, oversized sweatshirts, assymetric "do"s, and Ansel Adams black & whites were all present in my real 80's life.  And let us not forget the poor, dead ficus tree we dressed up in Christmas lights.

Plot: The overall plot is the product of my imagination, but I mixed in nuggets of reality. For example, there may have been a balcony arrest during spring break in Daytona Beach following a wet T-shirt contest (yes, I was the good girl standing in the middle), and I did see Wang Chung at the Clarendon.  A shoe went flying from a balcony one night at E. L. Krackers (a/k/a The Ritz), but it wasn't mine.  And I once participated in the invention of a game called Dial-a-Drink.

People: Except for one character---Aunt Lou, based on my real life Godmother---no one is wholly patterned after anyone I know.  I'm sure there's an element of every guy I ever knew melded into the Daves, and there were about a thousand guys named Dave on campus in the 80s, but I never actually dated one.  If I ever write a book about my real dating experiences, it'll be called something more like:


Two Ricks, a Couple Marks, One Len, a Craig, a Sean, a Steve, at Least One Brian, and a Darren...I'm Pretty Sure His Name was Darren.
Not nearly as catchy as Three Daves, is it?  Now it's your turn---what bits of reality have made it into your fiction?


Thanks for having me over, Tara!
You are more than welcome =) Thanks for all that inside info! Those were the days.
at 8:16 AM

Hooray! I love this review. I'm happy - and relieved - you had so much fun with it. I always get excited when someone tells me they've picked up the book...and then I get nervous. But you have made my whole weekend. :)

Thanks for letting me guest post and answer one of my most frequently asked questions. And thanks also for giving me the prompt for my guest post at Fabulosity Reads earlier this week! I get asked about the Bible verses ALL the time - mostly just out of curiosity, like with you - but some have seemed a little annoyed, so that one's been a long time coming. And this one -- this one was pure fun. :D

Sounds like a fun read. Thanks for the info.

Crappy cars should still be the staple for college kids! No new BMWs allowed.

I was at Uni in the 80's so I could probably relate to Jen very well. Congrats and good luck with the novel Nicki.

I don't know, it's quite snappy.

Awesome interview! I am dying to read this book now. Sounds like so much fun! Glad you shared!

I like that this book is set in the 80's. The cover fits the period perfectly. Thanks for the great review!

I think you make a pretty cool point. Sometimes, even without realizing it, we can add tidbits of ourselves or something we enjoy into a fiction piece. I must say, the title that you could have if this really were based on your real life loves would be interesting, though a bit tedious to say :-) Three Daves works much better.

Good luck and continued success with your novel.

I love the pink shoes.

I'll give 4 cheers for 3 Daves! I agree this book was a lot of fun and a realistic portrayal of college in the 80's. My first concert was Wang Chung, hee hee. Nicki, the balcony arrest was REAL? Sounds scary, you naughty girls. And I think you chose a much better fictional title than real title!

I've taken liberties with my hometown also, with is the setting for my first book. I think I had to change the year an album came out also. Been a while since I picked up my own novel .. .

'Crappy cars were such a staple of college existence that I couldn't resist.'

Ha! TOTALLY! I had a friend who drove such a claptrap of metal I used to tell him, 'Friends don't let friends drive junk.' Of course, his car was better than mine-- which was no car, at all!

I love this book review -- so informative. Thank you for sharing it!

You know, everytime you say Wang Chung, I hear it in my head like an evil curse. That song should be banned from the ether.

Great interview Nicki. Thanks for another great look into the past.

Awesome interview! I love what the title might have been. :) The book sounds fabulous!

Sounds like a very fun book and one that many of us "80's girls" can totally relate to. Crappy cars and all. My husbands door was tied on with an apron from his work. Oh yes...
Great interview.