I love it when I can roll two challenges into one. I overshot the word count, but I think it's worth it. (You can stop reading at 500 words if you want =) hee hee

The first challenge was from Doing the Write Thing - September prompt, give a Fairy Tale a new twist. I love a good twist! The second challenge came from Nina, Writing My Novel and Stuff. She's been going crazy giving out prompts on Google + (which I call Schmoogle) and her blog. They're great exercises. #22 was to tell what would happen if a magical creature (like a vampire) woke up normal. I thought it could fit very well with the other one. Here is what I came up with - during breaks on my first 2 sub jobs of the year - YEAH!


The Change
“Ow, my ears! That tiresome wench is singing again! Mirror, Mirror, what will I do with her?”
“Well, your Majesty, I’ll give you the bad news first. Snow White is getting prettier every day and will soon be fairer than you.”
“No! Say it’s not so! Are you cracked?”
“But wait, Majesty. The good news is, she could have an accident, she might fall down the well…”
“Oh, Mirror, you’re terrible! I love it! But I need the accident to happen far away from me so I’m not a suspect. Where’s Rudy, the Huntsman?”
“He’s out on a trip. He should be back tomorrow.”
“Tomorrow then. This will be the best night’s sleep I’ve had in weeks. I may not even need my sleeping potion!”
The next morning brought change.
Oh, I have an awful headache! The Queen grasped her head and rubbed her eyebrows. I will have to make a pain relieving elixir. But I can’t let this minor annoyance bother me, I have to take care of that brat!
She called to her advisor from her bed. “Mirror, Mirror, on the wall, where’s the Huntsman, fat and tall?” 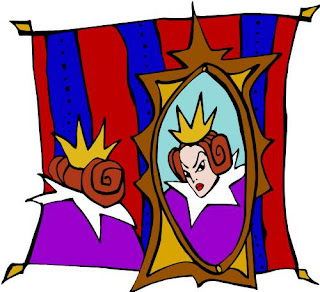 Silence answered.
“Mirror!” she screeched. “I’m talking to you!” Still nothing. She slammed open the covers, stomped over to the mirror and came nose to nose with her reflection.
“Wrinkles!? AHHHH!” she screamed. She inspected herself further. “Gray hair?! Veiny hands? Sagging? Oh, no!” She began to sob. Then she became furious.
“What’s happened to me! What’s going on! I demand to know!” she shouted. She stormed down to her secret lab.
“What’s this!” she picked up a bottle and chugged it. “WATER!?” She spun around. “All my beautiful spells and ingredients have turned into water?!”
She shook her fist at the enormous fireplace. “How dare you take my powers from me!”
She yelled as she ran back up to her room, “Dressmaker!!”
The dressmaker appeared. “Yes, your Majesty?”
“I need a bustier! And makeup, lots of makeup! Do we have a royal hairdresser?”
“No, Ma’am.”
“Get one!”
Word spread that the Queen had lost her powers. There was much hidden rejoicing.
As the weeks went by and the Queen got used to her new way of life, Snow White had been neglected. Some handmaids invited her out one night and they had a raucous time at a pub.
“Bring me Snow White!”
“Now, your Majesty, she’s just a girl. My daughter went through a phase too,” said the dressmaker, who had become the Queen’s new advisor.
“I’ve got this, Glenda. Don’t worry.”
Snow White entered with braids and beads decorating her hair.
“Take those out at once!”
“No!”
“What?”
“I like them. All the girls have braids!”
“Snow White, what has gotten into you?”
“As if you care!”
“But I do! Haven’t you seen the new me?”
“Sure. You lost your evil powers and now you’re old. It doesn’t mean you care about me!”
“I’m still the Queen! You will show respect! Snow White, go to your room!”
“See? You don’t care!” she yelled and ran out of the castle.
“That went well,” said Glenda.
“She’ll be back. This being a mother stuff is new to me.”
But Snow White got lost in the woods. She found a little house and rested for the night.
Search parties were sent but couldn’t find her. Then rumors came back that she had shacked up with seven little men.
“I have to go get her,” the Queen decided. The change had softened her.
“Send someone to fetch her,” Glenda said.
“No. I must go. But I will disguise myself to discover her true feelings first.”
The Queen, dressed as an old hag, approached the cottage.
“Hello, dearie. I’ve been traveling a long way. Could I rest here a bit?”
“Sure.”
“Such a pretty girl. What are you doing in the middle of the forest?”
“I ran away.”
“That’s too bad. Did your folks mistreat ya? Beat ya? Starve ya?”
“No. They were nice, actually.”
“So why'd you run away?”
“I don’t know. I was afraid.”
“Of what, dearie?”
“My mother. She changed.”
“Turned mean and ugly?”
“No. Nice and normal. I guess I was confused. My world turned upside-down.”
“I see. Do you think her world twisted too? Do you think she misses you?”
“Yeah. I never thought of that. I guess I should go home.”
“Yes. Let’s!” The Queen threw off her disguise and hugged her daughter.
“Wow! Thanks, uh, Mom.”
They went home and lived happily ever after, until Snow White started dating.

That was great. A lot of comical stuff in there.

LOL, that was great. The witch got what she deserved for battering Snow White. Disney would applaud. :)

hahaha. I love all your writing stuff you post. It always makes me smile.

Sweet! This is a fairy tale I would like to see!

Awesome! I especially love that last line: "They went home and lived happily ever after, until Snow White started dating." LOL. I'd like to see that story too. :D

I do feel sorry for the Dwarfs, though. Having one of their room mates just bail on them like that. Who's gonna pick up her share of the rent?

*Grumble*
The 'preview' did not, in fact, actually show what ended up showing. Oh well.

Love it Tara, as always. Best line? Has to be the rhyming one about the woodsman! And, there is so much truth to the story as well --- as humans we are so drawn to what is familiar, even if it is not what is best, as indicated by Snow White running away from the nice mom.