To Drift or not to Drift 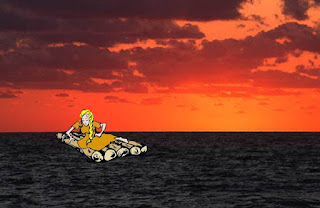 
Don't sail off alone
Drift my way, we can get there
Working together
Throwing you a hint
A sigh, a wink, a whisper
Did you catch my drift? 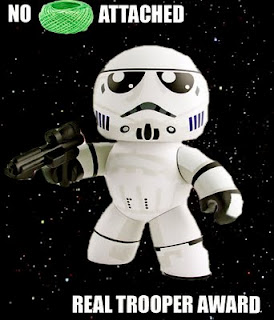 And Monday, I forgot to mention, Christine! She deserves special thanks. She gave awards freely to those who wanted them last week. I grabbed the Real Trooper Award! I love that guy! She also blessed any takers with a crit for RAOK - and I don't pass that up! She's super! Visit her!

So, now I will voluntarily embarrass myself with some admissions to show my thanks and that I'm a real trooper!

1. I once scraped a car in a parking lot and fled the scene (after going around the block, I went back and fessed up)
2. When I was 9? a guy from the paper came to our bus stop when it was pouring rain and took our picture - for some reason I was mad and hid under my clear umbrella
3. I had a bad habit of dating a guy, then dating his brother or roommate...
4. I used to collect dragons and purple pens
5. In high school I wrote a letter to a boy I met at a football game because we hit it off - a few days later, a popular chick yelled at me for it; he happened to be a friend of hers and she read it and accused me of being mean to him...I was like, huh?
6. In 2nd grade I was a singing camel in a musical
7. The first speeding ticket I got was with my younger sister in the car on our way to a movie, we were late (I'm always late)
8. The first time my sister heard me cuss was when I ran over a frog. Ew! Jumped right out in front of me!
9. Once when I was housesitting/babysitting I brought my puppy over to spend the night with us and he peed on a king size comforter - then after washing it, I burned a hole in it in the dryer!
10. I am loud. In 3rd grade I had to stand in the coat closet for laughing too loud.

And so, if you do not have this award, please take it! Do what you will with it. It's awesome! You are awesome! Perfect match!
at 7:38 AM

A singing camel? What were you singing? :)

And I could definitely see cussing in the case of running over a frog. Perfectly understandable.

Why did bad things happen to us while babysitting? Always. It never failed.

Loved reading more about you. :))

I LOVE your Haiku! Have a great day Tara! :)

I enjoyed the way your set was so personal...Well-done

Came for the haiku, stayed for the super awesome list. Bless you for laughing too loud for others' comfort!

You have the best posts.

I love the 'bad' things you admitted to.

You are a Real Trooper!
Heather

He is a real cutie!!

Your ten things are hilarious, Tara! So was it the teacher who made you stand in the coat closet? I guess that's better than sitting in the corner wearing a dunce cap!

Enjoyed the haiku - especially the second.

Yeah, I didn't get sent to the closet, but only because our school had a strict no closet policy (for reals). I did get a lot of extra lines and sitting out of recess.

Was the brother or roommate at least cute??

Standing in the closet - I should try that with my kids at home.

I love the haiku! The first one describes me perfectly today. :)

I had fun reading your ten things. Something about the second one reminded me of myself at that age.

What did the people say about the comforter? Those kinds of things always seem to happen to me, too.

wow she put you in a closet---loved the poem!

As always, I loved your haiku. I found a bit of humor in the last. :) Made me smile.

Christine is fab & it's a great award.

Cute that you were a singing camel. I think I was a singing flower in 2nd grade.

Great haikus! I did catch your drift. Hehehe! And thank you for the shout-out. You're so sweet.

Singing camels are cool! A singing camel that collects dragons and purple pens dating the brother of her ex-boyfriend, now that's a story!

You ARE a trooper, putting this out there when you know your mom reads it!!!!!!!! Next time you come over I may have to send you to the closet again, ha-ha.
mom

I once left a restaurant with my friend without paying. I felt guilty and went back to pay the $15 bill. Turns out we weren't the only ones who bailed. Another table had a $90 bill, and I don't think they went back.

I'm sure you were a fabulous singing camel, Tara. Ha ha.

Congrats on the award. The haikus are nice too.

Love the haikus and your list. I still love dragons :)

such funny facts! Thanks for sharing, especially the camel one, lol! So glad I found your blog!

Madeline - can't remember the song, but my mom made me a great costume!

Candilynn - I love that movie Adventures in Babysitting! and thanks!

Joanne - yes, I don't usually do that, it was heartfelt today

Heather - your posts are excellent as well! glad to know you!

Laura - yes, the teacher and it was more of a cloak room

Cassie - they usually were, but they were also not as bright! go figure!

Annalisa - i should too, actually!

katy - thanks, i often feel that way!

Dana - it was a divorced guy with a young girlfriend & preteen boys...he didnt care, but she did...

Lynn - it was bigger than a mudroom...thanks!

Mary - every kd should do a musical! character building! ha!

Mom - i had to leave out a couple in your honor, hee hee

McKenzie - too bad we didnt video back then as much...thanks!

Leslie - thanks! me too!

I enjoyed your set of Haiku and a delightful post ... win-win!! Thank you for sharing. Lazy and Drifting

Great haiku writing!
I love the bit about the camel in a musical- got any pics?

Sometimes being adrift isn't all that bad!

A Drift of Pollen