What's the first thing you think of when I say Fantasy? I thought of dragons. I love them! 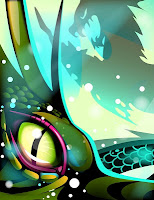 Now, say you've written an awesome book and it's a fun romantic story. You query an agent and call it a contemporary romance. The agent sees the genre and ... what?


DO YOU THINK SOME AGENTS AUTOMATICALLY SLUSH A QUERY BASED ON THE GENRE?

I'm not saying all, but I bet when I send my Sci Fi Thriller, some agents/readers might auto-slush it, thinking, "I'm not looking for sci fi." But my book doesn't fall in the traditional sci fi, it's more of an adventure. I say it's like a combination of "Romancing the Stone" and "I, Robot" - a romantic comedy/adventure set in the future with laser teleportation! How do I put a genre on that? I know there are mixed genres and sub genres, but in the bookstore/online categories I'm guessing mine would go in sci fi, so that's where I pigeon hole it in the query. The same is true when people buy books - some people have a preconceived notion about genres and won't look in those sections.

So let's play a game...
Here are a few genres. You say the first thing that comes to mind. I will too. It'll be fun!

Looking forward to your associations! What do you think? Do agents (and their pre readers) get so many queries these days that they skim to find the genre and toss away the story? And are there sections of the bookstore you don't bother looking in?

Thanks for playing and have a wonderful MOTHER'S DAY WEEKEND! May you not have to lift a finger at least this one day of the year!
at 7:08 AM

Email ThisBlogThis!Share to TwitterShare to FacebookShare to Pinterest
Labels: writing a book

For Romance, I always think of Fabio! LOL

Wow...what does that mean? LOL

Sorry, I froze. As soon as I read "the first thing that comes to mind," I went blank. I don't even want to know what that means. :)

I wouldn't think an agent/editor would toss it based on genre, especially if they state somewhere in their guidelines that they're looking for that sort of thing.

I actually think I would classify your book as a thriller and not Sci-fi. Mostly because it is more about the thriller and only lightly touches on the science bit. Maybe that will help.

Angela has a good point.

Just because your story takes place in the future and the technology is different doesn't make it science fiction.

Perhaps a new term needs to be coined.

Not sure these associations really fit, but those are the first things that pop into my mind

Romance: boobies
Literary: lot of words I have to look up in order to understand.
Women's: bigger boobies
Fantasy: lots of glitter
YA: where were these super hot guys in my high school?
Sci Fi: Space Invaders
Horror: Skinny blonde dying in the first chapter.
Commercial: BUY ME!
Thriller: Law and Order theme song.
Chick Lit: lots of squees and giggles.

I think everyone makes general assumptions based on genre. Yet, these days, so many thread together.

Now remember, you said for us to put the FIRST thing that comes to our minds. I mention that as my disclaimer lol!!!

As for your novel, it sounds like genre bender. I wonder if you can put that in for your description?

I'm having this same issue with trying to 'categorize' the Hetty Locklear series. I've heard the best way is to start with audience. Margaret Atwood doesn't sell under sci-fi. I'm targeting women more with the next one. I think we need a new category.

Oh man. I shouldn't have read the comments first. My associations have been tainted! LOL

Have a great weekend, Tara!

Some of these comments are just great! I am smiling from ear to ear!

I thought very hard before labelling my novella as romance, even though I'm still not sure it is!

I definitely think if you call your work SF, and send it to an agent who hasn't said they're looking for SF, they're not going to accept it. No matter what type of SF you've got there. I actually find it really hard to categorise the genres of my novels, sometimes. But I am coming to suspect that's because I don't understand my own novels well enough. hehe

We definitely have preconceived ideas about certain genres. I reckon if you put the expanded description in your query (it's like a combination of "Romancing the Stone" and "I, Robot") then that alone should pique their interest. It certainly has me intrigued.

These are the greatest! I love the associations that popped up! Many of you guys thought I meant tv commercial - commercial fiction is a generalizing genre, meaning one of the major genres

Angela & Heather - thanks for the encouragement!

Trisha - I definitely research the agents and when I call it sci fi, I send it only to those who say they accept it. Same for when I call it thriller. So either my query isn't great or they are looking for something else...either way I'm not for them and that's fine - I keep trying!

Happy Mother's Day to you all too! Hope it was a pleasant experience!

and Lynda - thanks for your advice too =)