Our God He is Alive

This statue was affectionately called "Touchdown Jesus." It was startlingly visible along I 75 North just south of Dayton, a symbol of the Solid Rock Church. According to their website, it looks like they start out with the scriptures, but they also like a "show" - speaking in tongues, divine healing, etc. Hence the  scary sculpture. 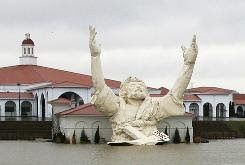 It was recently struck by lightening. But never fear, the church is going to spend the half a million dollars to rebuild it. Think they could better use that money? 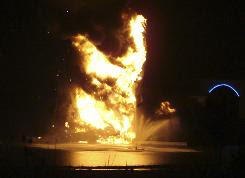 Now we have this hideous distortion. If you have money, you can say anything you want, as big as you want.

I'm praying God strikes this with lightening too...if not, they'll know He is, soon enough.
at 4:42 PM

Email ThisBlogThis!Share to TwitterShare to FacebookShare to Pinterest
Labels: opinion