Ever start thinking about something and it makes you think of something else, and on and on until you forget where you started? "Why did I think of that?"

My problem is, I'll be in a conversation with a group and I'll hear something to trigger it. The topic will get on the train and when I finally say something it will be completely side tracked, drawing strange looks. Oops! 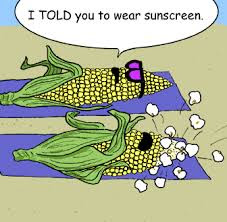 It's getting hot again. My friend called it Indian summer. Wonder why it's called Indian summer - is it like Indian giver? "Here's some cool fall weather, uh oh, now I'm taking it back!" But that phrase is offensive to Indians - Native Americans. And if they are now Native Americans why can't we use the term Indians? Does it bother people from India? My neighbor is from India, I could ask her. Her son is in my son's class. They've been in the same class like four times. There's a girl in his class that has been in his class since kindergarten - 6 years! Hard to believe since our schools seem to have so many kids, but I guess it's really small. It's a small world =) Is it hot in here?
at 9:53 AM

Email ThisBlogThis!Share to TwitterShare to FacebookShare to Pinterest
Labels: funny