As Wisconsin goes, so goes the country?

I don't go political very often, but this is getting ridiculous! And it only seems to be getting worse.
What a mess! The GoVERNments of our country, states and cities have taken our money and squandered it. Flushed it into their own schemes, not being held accountable and now we're stuck paying more to fix it!
We scrimp and save and take pay cuts and layoffs. We pay more taxes and pick up the slack for our own kids' educations when the tax money runs out. Don't ask me to buy girl scout cookies this year - I can't afford it! (I'll never find $3.50! the couch cushions.)
So across the nation we have elected new faces. We are so hopeful that someone new will have an answer.

Then we don't like the answer. "Sorry we wasted all your money. Now we have to cut, cut, cut and tighten 'OUR' belts so we can function."
Now turn to Wisconsin. Governor Walker was elected by people who wanted a change. (Sound familiar?) The state legislature majority was also converted and the majority support the Governor. (Again, this really rings a bell!) The Governor seems to want his state to succeed and has worked with the congress to come up with a solution - he has found a way to cut spending, but it happens to be from his opposition's purse.
I had to look really hard to find out what exactly this bill does that is causing such a fuss. From my extensive googling, most of the articles just ranted and raved and emphasized, "Look at all the protestors, they're camping out, they have quippy signs," etc. Not much facts about the bill.

I really don't think the protestors (and possibly the people reporting about them) understand fully WHY they are against this bill, other than - "Darn that governor for trying to mess with my union."

Unions are not the same as they were when they started. They were necessary at their inception and made many outstanding improvements. But today, their membership is on the decline. And Ohio is the next in line to amend the Government/Union liaison. Then Indiana and more? It's a relationship that needs updating.

To show I'm not trying to be biased about the bill, I give you The Huffington Post, a liberal paper. At the bottom of a lengthy article dramatizing the protests, I found their description of the contents of the Wisconsin bill. I highlighted the good parts.

"But when voters elected Walker, an outspoken conservative, along with GOP majorities in both legislative chambers, it set the stage for a dramatic reversal of Wisconsin's labor history.

Under Walker's plan, state employees' share of pension and health care costs would go up by an average of 8 percent. The changes would save the state $30 million by June 30 and $300 million over the next two years to address a $3.6 billion budget shortfall.

Unions still could represent workers, but could not seek pay increases above those pegged to the Consumer Price Index unless approved by a public referendum. Unions also could not force employees to pay dues and would have to hold annual votes to stay organized.

In exchange for bearing more costs and losing bargaining leverage, public employees were promised no furloughs or layoffs. Walker has threatened to order layoffs of up to 6,000 state workers if the measure does not pass.

Wisconsin is one of about 30 states with collective bargaining laws covering state and local workers.

Walker has argued the concessions are modest compared with those suffered by many other Americans. Democratic opponents and union leaders say his real motive is to strike back at political opponents who have supported Democrats over the years." 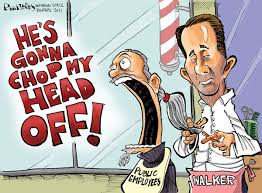 Leave it to opposition (no matter who it is) to fabricate ulterior motives. "Their REAL agenda is to GET US!" Get over yourselves! Be part of the solution!
It looks to me like the Unions are blindly leading their members out of fear to protest. The democrats in this instance are hiding out like fugitives. These cowards are holding back democracy. They should be ashamed of themselves. They aren't standing up for anything. Their stubborn, misconceived example reminds me of a six-year-old, "If I don't get my way, I'm gonna run away or cry about it." Let's see how long they can hold their breath!