Terminator in the Caribbean 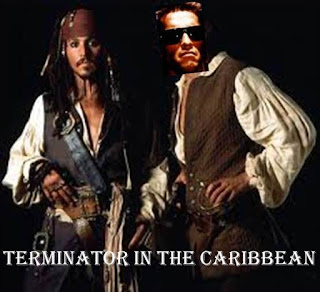 TERMINATOR flashes into existence in the brig of the Black Pearl. He breaks free, kills the nearest pirates and takes their clothes and weapons.

JACK SPARROW is on the deck trying to use his magic compass to find DAVEY JONES and kill him rather than settle his debt. The Terminator blasts his way to the deck and Jack offers to help him. Terminator was sent back in time to destroy WILL TURNER.

Will Turner is on Davey Jones's ship. Sparrow convinces Terminator he can help him find Turner. He has Terminator use the compass that points to what he wants.

Turner escapes on his own and tries to find his love, ELIZABETH SWANN. She is lost looking for him.

Sparrow and Terminator find Miss Swann first and use her for bait to get Turner. He falls for it and Sparrow intervenes before Terminator gets him. Sparrow tells Turner to go back to Jones telling him only Jones can kill Terminator.

Sparrow makes deal with Jones to help kill Terminator. Terminator destroyed. Turner and Swann get away. Jones and Sparrow go separate ways for now.
at 11:53 PM

This is hilarious and makes me wonder HOW have I not found your blog before today?!

Count me in as a new reader :)

Great fun! Thanks for playing. :)

What Christi said! I'd really like to watch this movie now, pretty please.

ROFL! Now this is great mash-up film I'd queue up to watch. Will it have Terminators swimming and clambering onboard while dogs bark?

You guys are great!
Christi - thank you =) nice to know I'm not just talking to myself, you know what they say about that...

Deb - I'm looking forward to the new one this summer =)

Eeleenlee - yea, the dog with the key! Then Terminator walks the plank and says, "I'll be back!"